Check out the gallery below to see the new Archie Comics digests, comics, and graphic novels arriving in comic book stores in March 2022. To pre-order these comics, contact your local comic book shop by using the Comic Shop Locator or online at the Archie Comics Shop. 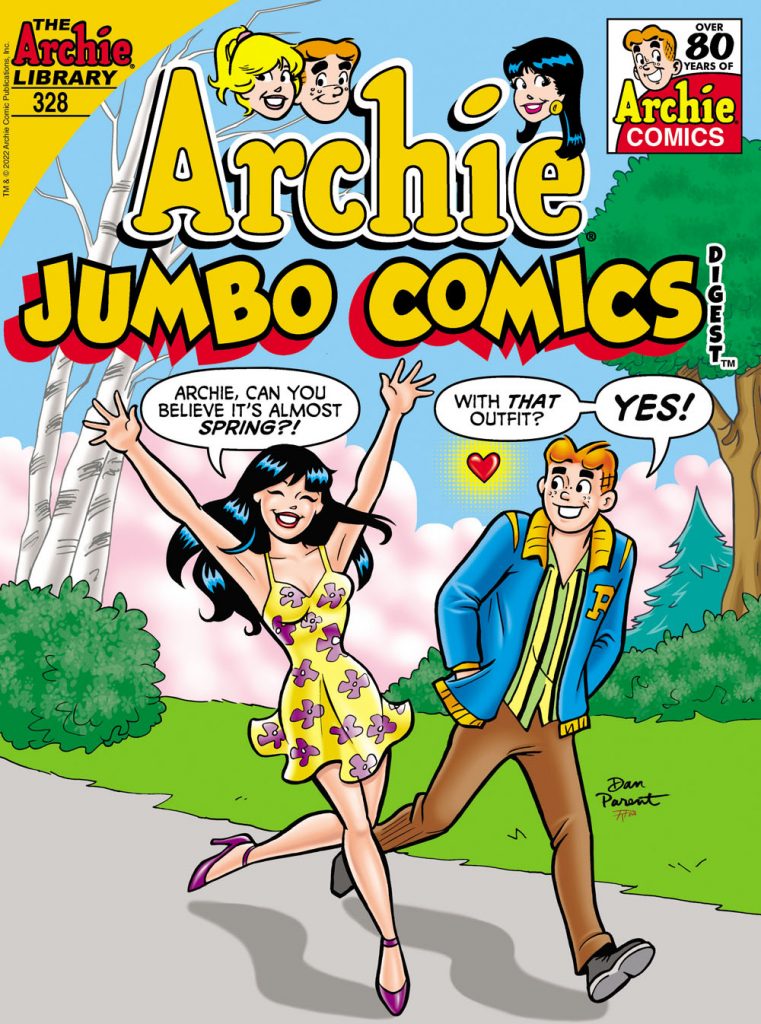 TWO BRAND NEW STORIES! First, in “History Repeating” it’s time for the annual Riverdale Spring Dance and everyone’s getting into the spirit of the season—aka stressing out big time for the dance! Betty & Veronica discover they’ve bought the same exact dress thanks to the influence of Cheryl Blossom! Kevin’s trying to make sure Cheryl doesn’t ruin the entire engagement and Jughead is.. well, being Jughead. While everyone’s spring fling is turning into a spring disaster, can Archie swoop in to save the day?

Then, we have “Breaking the Ice”, a brand new Steel Sterling story that sees the hero taking on one of the most difficult tasks he’s had to yet—mentoring a new, young hero. Namely, Pureheart the Powerful! Can Pureheart prove to Sterling that he’s more than just sidekick material, and has what it takes to be a full-fledged superhero all his own? 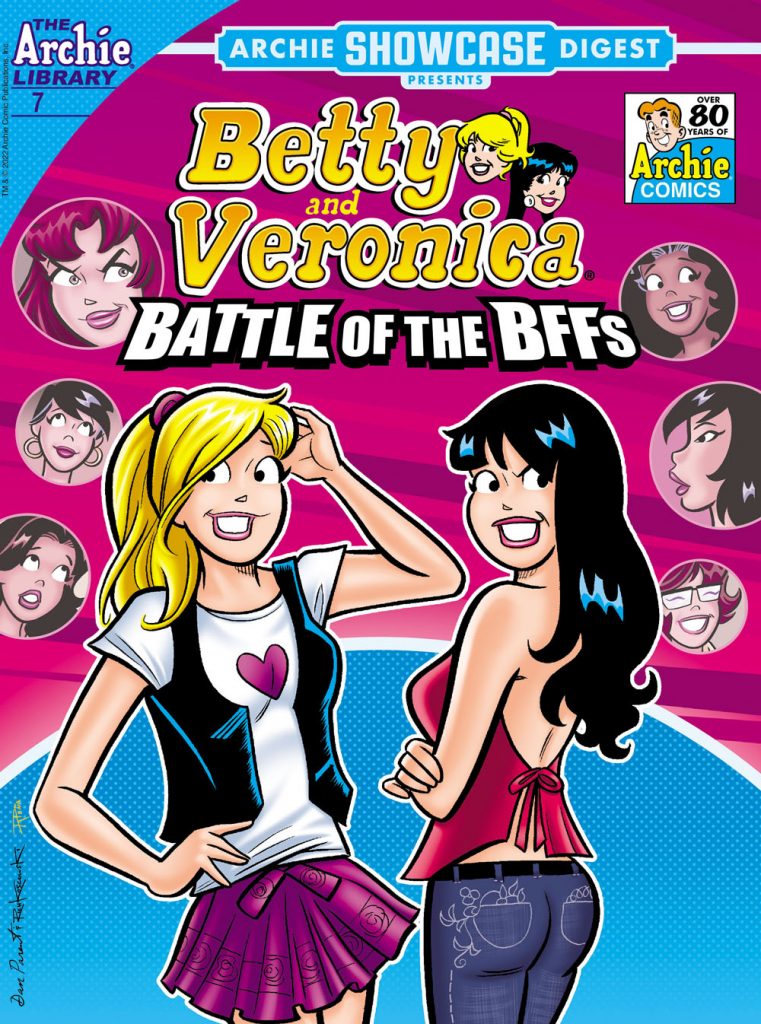 THE ARCHIE SHOWCASE DIGEST SERIES RETURNS! This issue spotlights the beloved BATTLE OF THE BFFs storyline. Betty and Veronica, the most famous BFFs in all of comics, team up for a Battle of the BFFs reality show to prove that their friendship will survive under any hardship—but can it? And how do the other girls’ friendships in Riverdale hold up to theirs? All that and more bonus content in this fun collector’s digest! 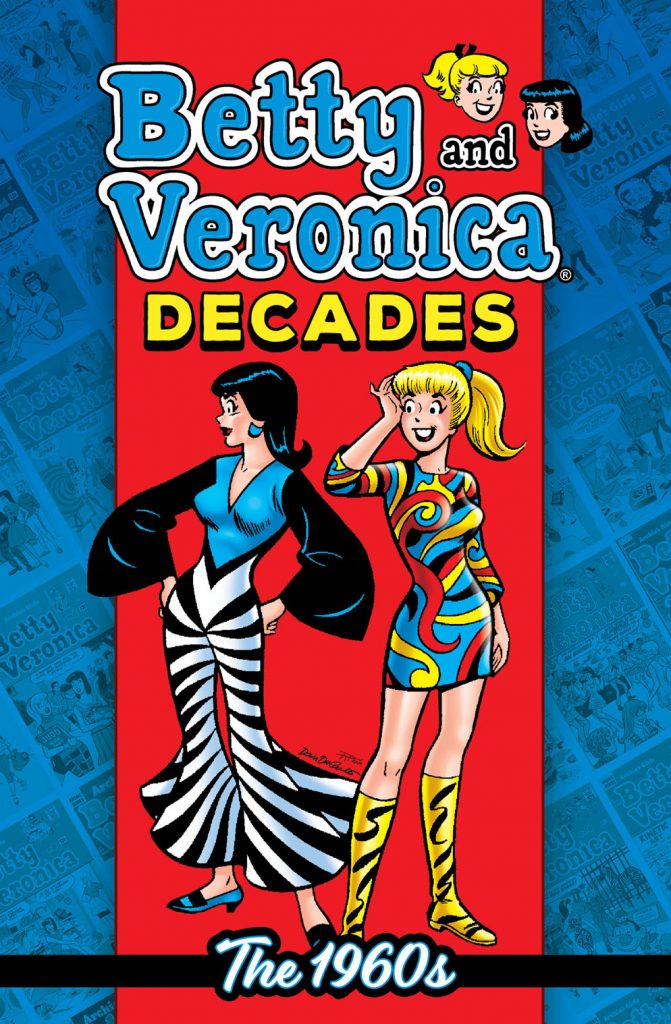 Journey back to the Silver Age with America’s Sweethearts, Betty Cooper and Veronica Lodge, as the duo scaled to new heights of hilarity in the Sensational Sixties! Continue the 80th anniversary celebration of Archie Comics with this special retrospective collection! Betty & Veronica shined bright in the 1960s when their standalone title proved to be interesting, hilarious and unforgettable—and their fashion was always top-notch! Decades features some of the most well-known talent like Dan DeCarlo, Harry Lucey, Rudy Lapick and more putting their spin on the most iconic stories that cemented their lasting imprint on the world. 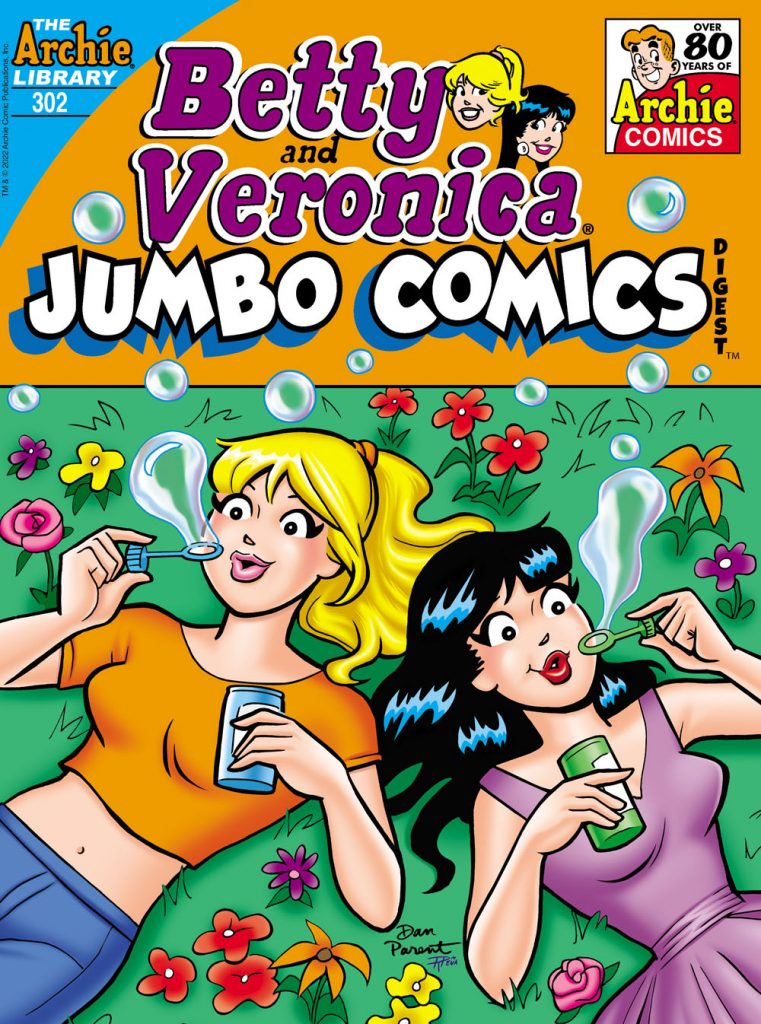 BRAND NEW STORY: “Prank Wars!”  It’s April Fool’s day—aka Reggie’s favorite day of the year! True to form, Reggie has been pulling pranks on everyone in Riverdale High. Betty and Veronica have had enough so they get together and turn the tables on him—but will they really be able to beat the prank war champion at his own game? 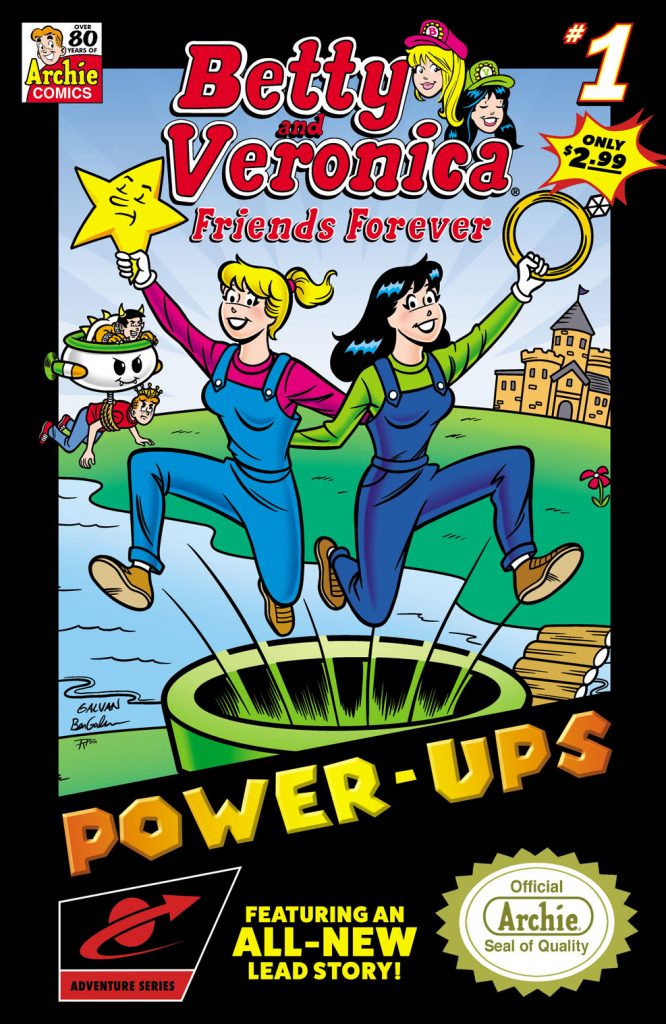 Betty & Veronica level-up in this collection of video game stories! In the BRAND NEW LEAD STORY, Betty is hanging out with Veronica when she gets a distressed call from Jughead in the multiplayer online game “Riververse! He’s in trouble somewhere and needs backup, ASAP! Betty and Veronica log in, determined to save Jughead. Do they have what it takes to battle monsters and recruit some help to save Jughead? 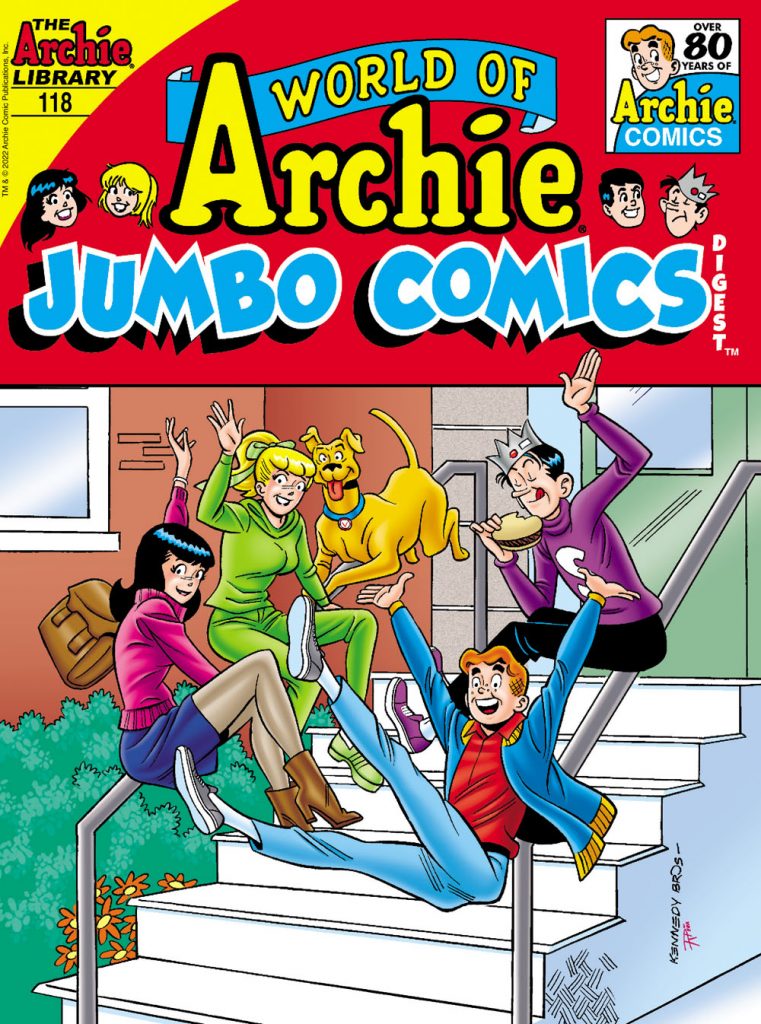 TWO BRAND NEW STORIES! First, in “The Big Fix!” Jughead’s wacky Uncle Herman has decided to help out with some house repairs on Bingo Wilkin’s parent’s roof. But seeing as he’s older and not in great shape, Bingo offers to help him. But this is a big task, so Herman gets Jughead on the job, too! Can the three of them get the work done?

Then, Archie’s got a new side hustle as a rideshare driver, but business has been slow—that is until he gets an urgent ride request from none other than Steel Sterling himself! Archie’s on superhero sidekick duty yet again as the two work together to stop some crooks on the run! 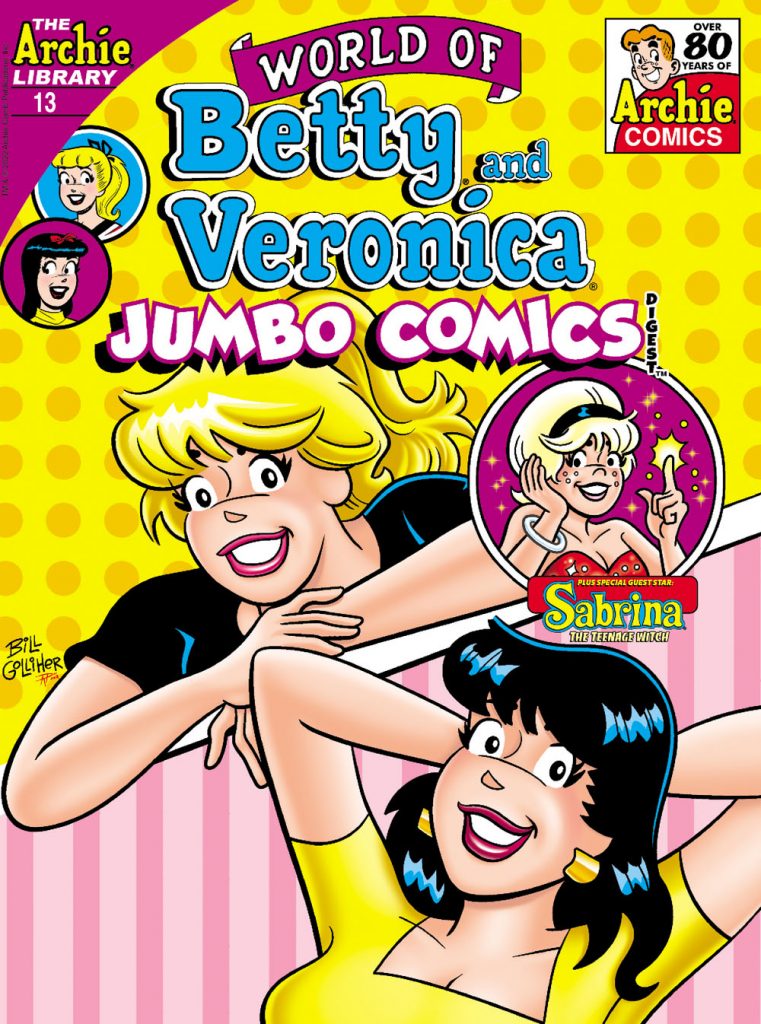 BRAND NEW STORY: “What a Story!” Sabrina the Teenage Witch has landed herself a very important job: as a babysitter! Sabrina, feeling a little under the weather, sneezes and accidentally sends the little girl she’s sitting into the storybook she was reading to her as a bedtime story! Will she and the little girl be able to escape Wonderland?!