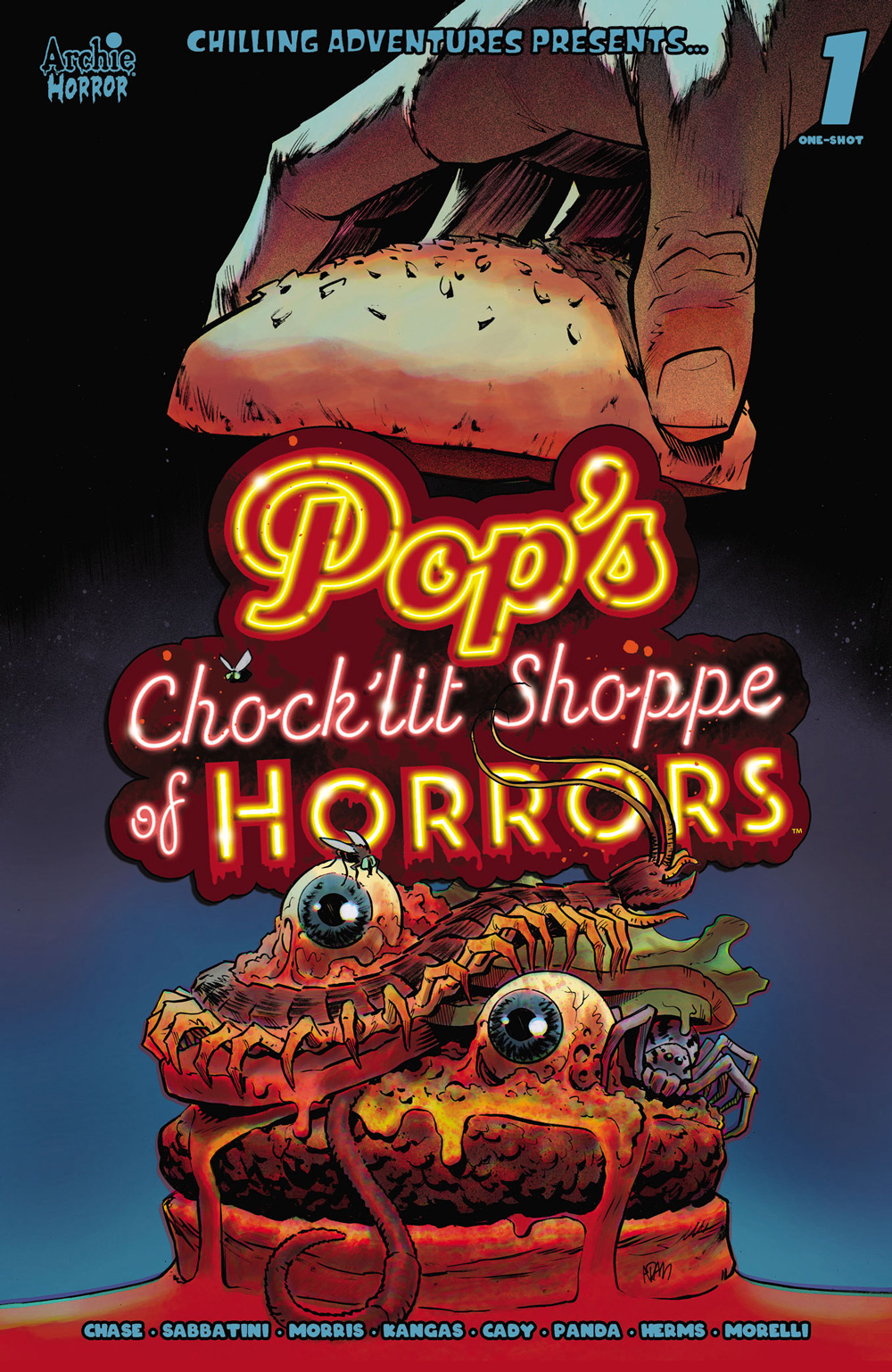 In a trio of new terror tales, a dark side of Pop is revealed as he exacts revenge on ne’er-do-wells when most of Riverdale is asleep and safe at home. The collection includes “Night Shift” by Ryan Cady (Infinite Dark) and Chris Panda (Transformers), “Soylent Teen” by Eisner nominee Jordan Morris (Jordan, Jesse, Go!, Bubble) and Liana Kangas (Star Wars), and “Die-and-Dash” by Amy Chase (Escape From Bitch Mountain) and Federico Sabbatini (Moon Knight).

“The first time I ever really thought about Pop being not-so-nice and the food he serves maybe not being exactly edible, actually came from a pitch writer Ryan Cady had many, many moons ago,” Archie Comics Senior Director of Editorial Jamie L. Rotante said. “Elements of Pop’s sinister side were even explored in the RIVERDALE tie-in comic! The idea always stuck with me and I hoped we’d get the chance to explore it in some capacity. Once the idea was given the green light, I knew Ryan needed to be a part of it. These stories crafted by the amazing team of Amy Chase, Jordan Morris, and Ryan are so creepy, campy, schlocky, and both horrific and hilarious. I can’t wait for everyone to take a bite out of this comic!”

Cady added, “One of my first ‘real’ gigs in comics was a Big Moose story, so it’s a blast to be working on Archie stuff again . . . especially the horror line. When AFTERLIFE WITH ARCHIE debuted, I remember thinking, ‘Man, I’d kill to do one of those,’ and now, here we are — no murder necessary!” 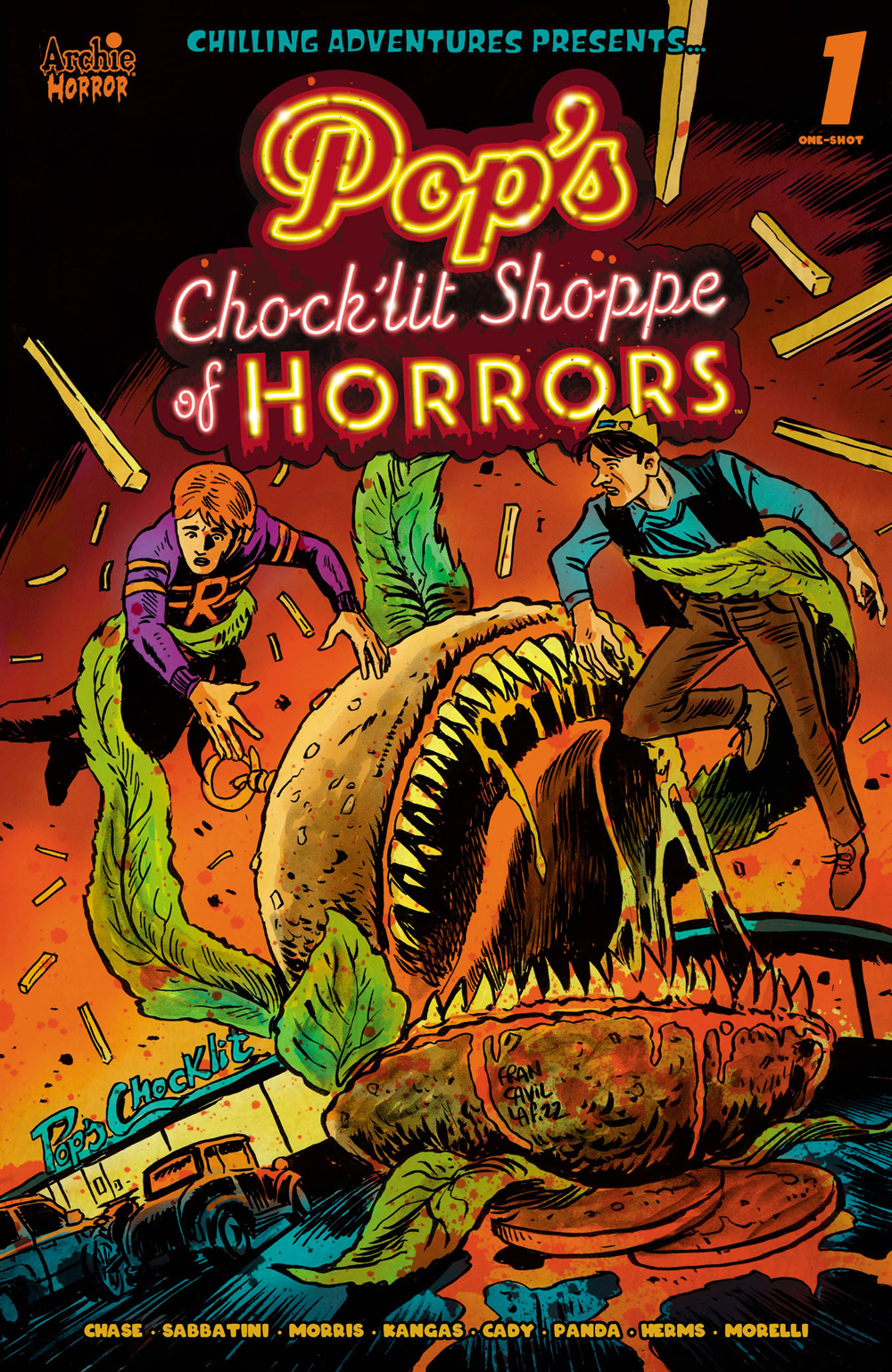 The new one-shot hints at a fascinating continuity with earlier Archie Horror comics, and that Pop may have something to do with the terrible events plaguing this version of Riverdale since the zombie invasion detailed in AFTERLIFE WITH ARCHIE nearly ten years ago. The writers contributing to POP’S CHOCK’LIT SHOPPE OF HORRORS all spoke to the imprint’s legacy in the horror genre.

“I’m a huge fan of the Archie Horror line; it’s incredibly cool that the publishers are game to take characters known for being wholesome and put them into some truly dark, messed-up (but still funny!) scenarios!” Morris said.

“The world of Archie Horror feels so effortlessly cool,” Chase said. “It has a perfect blend of timelessness and innovation thanks to the way these stories aren’t afraid to turn existing archetypes on their heads. Contributing to that library is a total bucket list item for me, and I couldn’t imagine a more fun project to make my ‘big publisher’ comics debut.”

POP’S CHOCK’LIT SHOPPE OF HORRORS, with an open-to-order variant cover by Francesco Francavilla, colors by Matt Herms and lettering by Jack Morelli, releases March 22 in comic shops nationwide and will be available for pre-order in comics shops now.

Pop Tate is the glue holding Riverdale together, whether everyone realizes or not. His Chock’lit Shoppe is the beating heart of the city, where everyone can stop in for a delicious bite and some safe haven—even the worst sorts. And not just the run-of-the-mill rapscallions who recently broke the jukebox. When a young Riverdale couple (Nick St. Clair and Sherry Thyme) attempt to dine and dash on the humble small business owner, they quickly discover the fryer grease isn’t the only heart-stopping thing about the Chock’lit Shoppe. From tales of mystery meat to the unnatural visitors that dine late at night, this anthology tells stories about the horrors that happen at Riverdale’s beloved malt shop—and how Pop Tate is at the center of it all, the most powerful figure in Riverdale providing haven to all sorts of terrors and underhanded villainy.