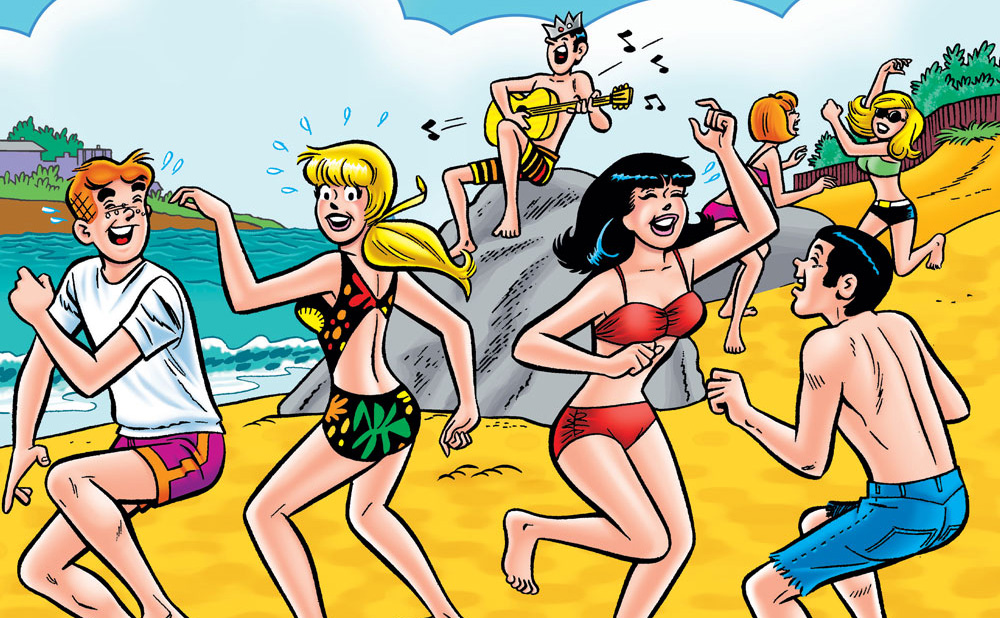 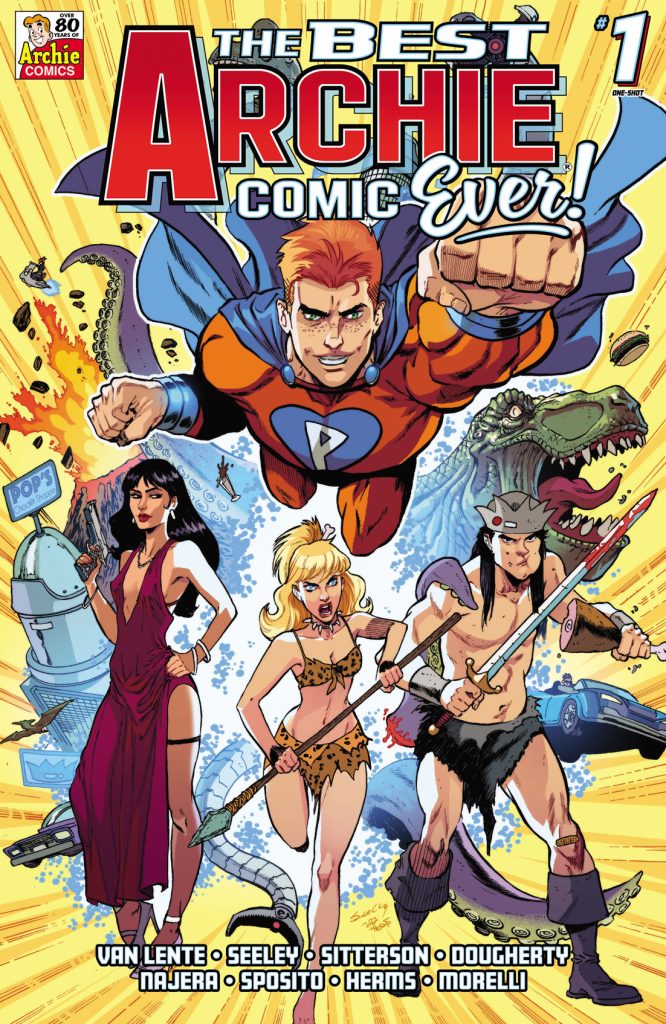 THE BLOCKBUSTER OF THE SUMMER IS HERE featuring Superheroes! Barbarians! Spies! All this plus Archie’s trademark mix of romance, humor, and adventure in an all-new anthology! In the first of three all-new stories, Pureheart the Powerful encounters a superhero that looks a lot like himself! Is this other hero an imposter, or is it a case of imposter syndrome? Next up, the reluctantly heroic barbarian Jughead Jones is scaling a tower, hell-bent on saving the day and waging war against a menacing wizard in a tale that action & adventure fans will love! Finally, intrigue and espionage take hold as the world’s most dangerous woman Veronica Lodge teams with spy extraordinaire Betty Cooper on a top-secret case! THE BEST ARCHIE COMIC EVER #1 is here from comic power-hitters including FRED VAN LENTE, TIM SEELEY, the incredible team behind Savage Hearts, AUBREY SITTERSON and JED DOUGHERTY, plus rising talents RUBEN NAJERA and GIORGIA SPOSITO! 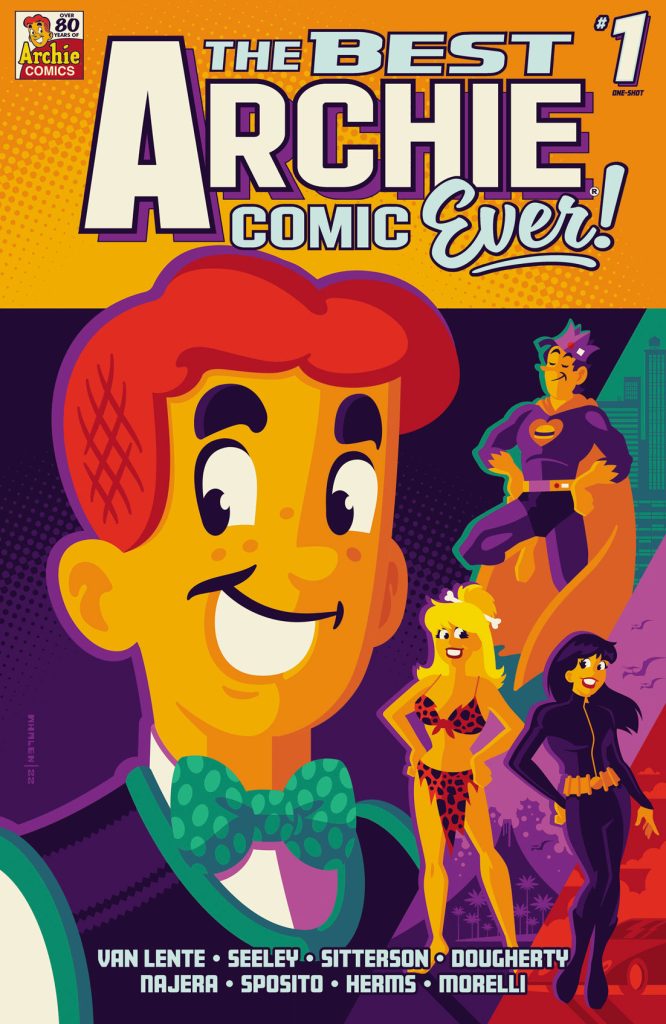 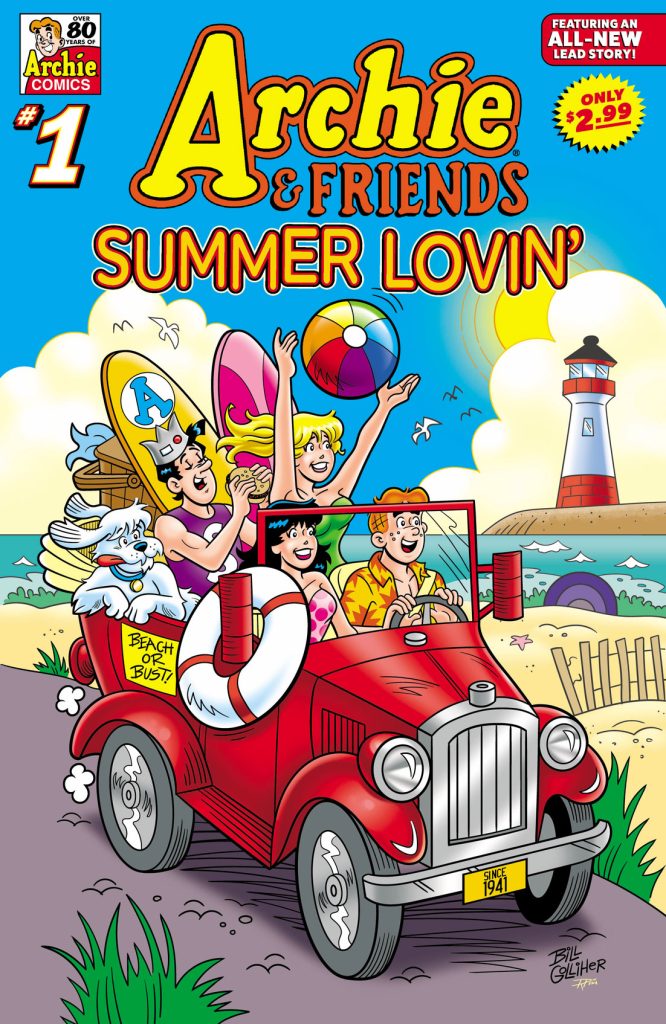 BRAND NEW STORY BY TEE FRANKLIN & DAN PARENT: “Carnival Love!” It’s time for some fun (and maybe even romance) at the Riverdale summer carnival! Looking to rekindle their relationship, Reggie is excited when he finds out Veronica’s cousin, Harper Lodge, will be visiting a traveling carnival that arrived in Riverdale! Plus, a collection of fun-in-the-sun stories perfect for a beach read! 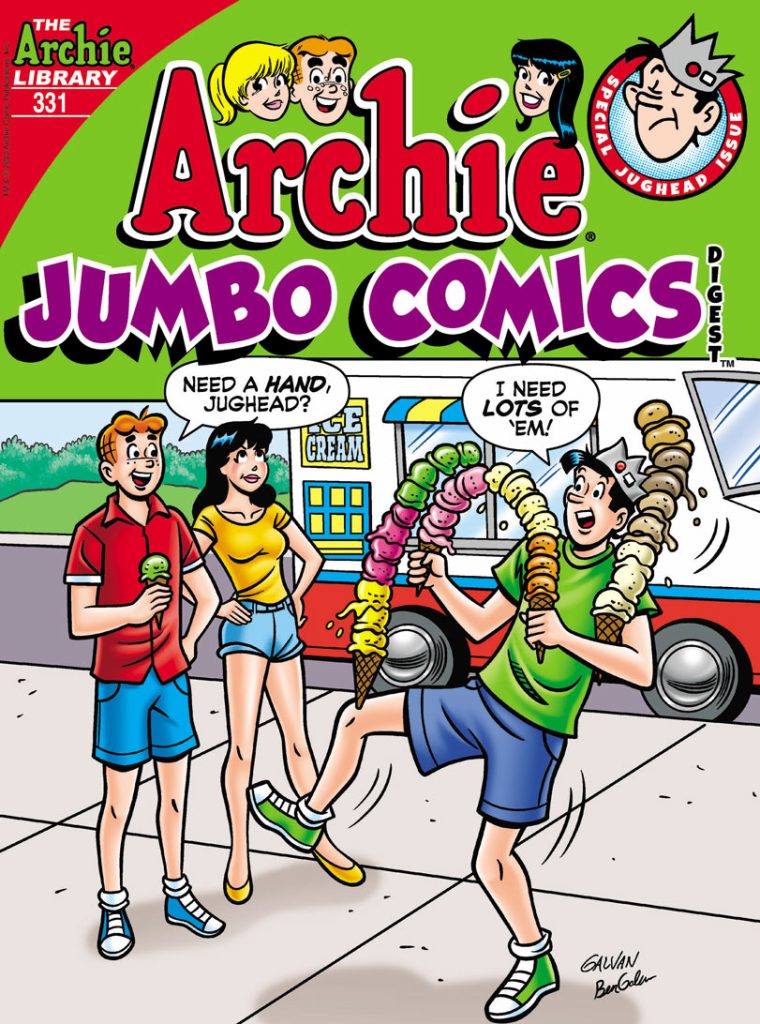 FEATURING TWO BRAND NEW STORIES! First, in “Volley Folly,” Chuck has an idea for a side hustle on the beach—he wants to paint custom volleyballs! He gives a free sample to Jughead in hopes that Jug will talk it up and promote it. The ball has Jughead’s face painted on it and Jug loves it. But soon after, Jughead notices weird things are starting to happen, like whenever the ball gets hit, Jughead feels it! Is there more to this novelty volleyball than meets the eye?

Then, Bingo Wilkin returns in “Bad Blood Buds”! When Samson and Willie (Samantha and Bingo’s dads) are in feud mode, Bingo and Samantha declare that their true love will prevail in the face of adversity. An idea is born, and the two dads decide to act like best pals to see if that might derail their kids’ romance, since nothing else has worked. With tensions mounting in Samantha and Bingo’s romance as their dads begin to get along, Bingo is in need of some sage advice: enter Jughead Jones, Bingo’s cousin! Can he help salvage their romance and put an end to their fathers’ constant feuding? Maybe after lunch and a long nap. 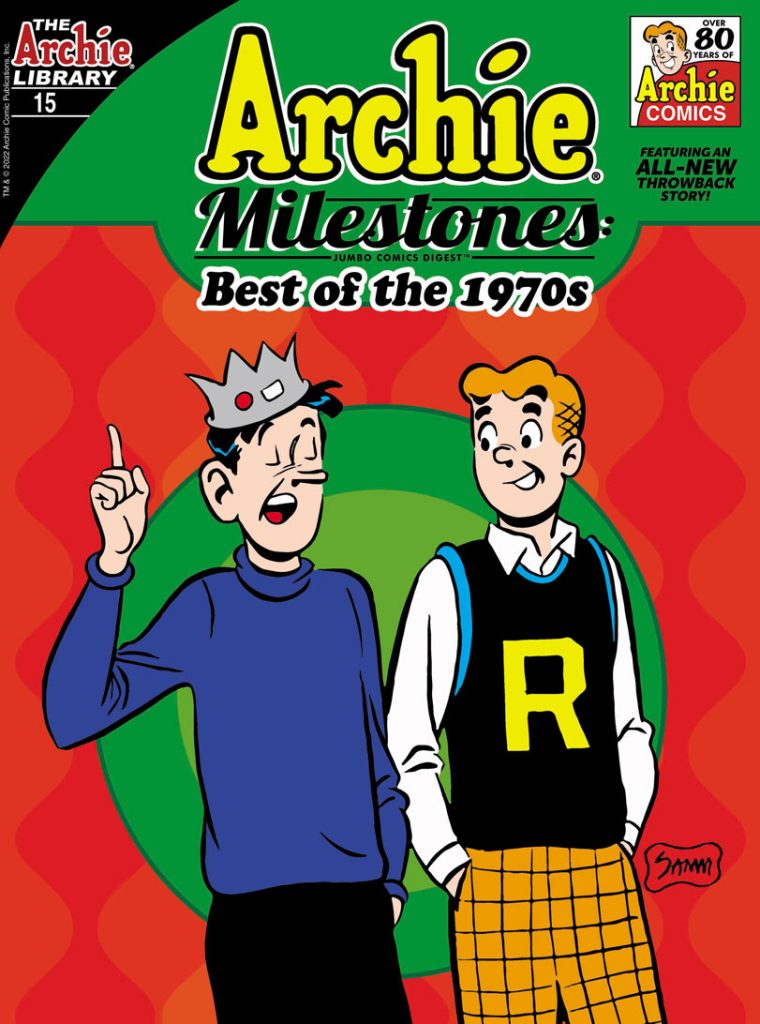 FEATURING A BRAND NEW “THROWBACK” STORY: “Watch and Roll!“ When Archie is floored by Reggie’s superior moves at the roller disco, Jughead offers to teach him how to boogie down in the rink… but does Jughead himself actually know how to skate? Chaos is sure to ensue in this groovy throwback story set in the 1970s! 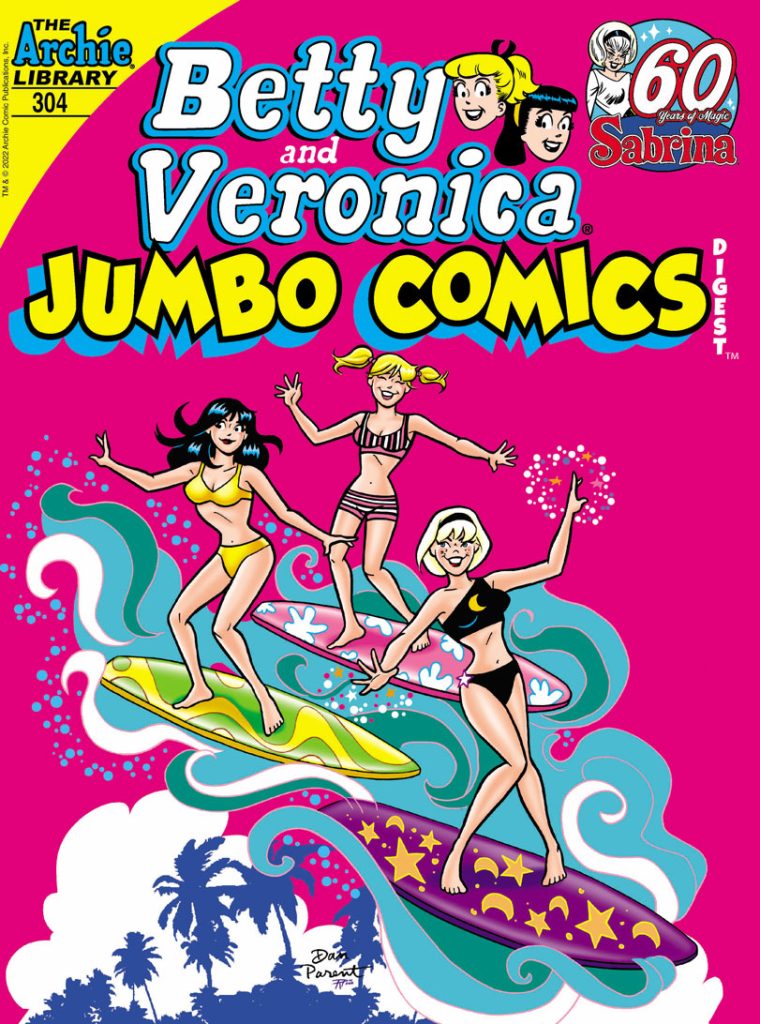 BRAND NEW STORY: “Smells Like Teen Spirits“ A new beach pop-up shop has opened in Riverdale where you can mix your own fragrances and Betty and Veronica are excited to make a summer scent! However, when the two accidentally walk out with not a scent, but instead a potion concocted by Sabrina the Teenage Witch, all sorts of unexpected and unfortunate things start happening when they wear it—including repelling all the boys they approach! Sabrina has to find a way to undo the damage without Betty and Veronica noticing! 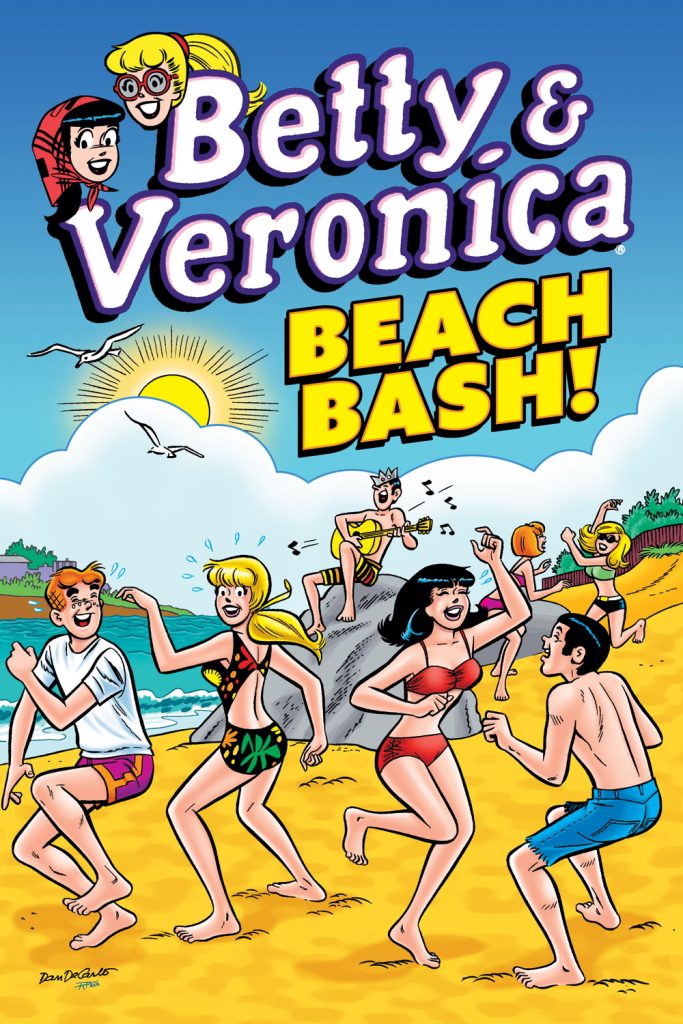 Enjoy some fun in the sun with this cool collection of sizzling summer fun! The Riverdale Shore is about to see the wildest party ever! Betty, Veronica and the gang are taking over the beach in this special summer compilation. With all the sun, surf and swimsuits, it sounds like a paradise! Put on some sunscreen and join us in this 120-page collection of classic Archie Comics stories! 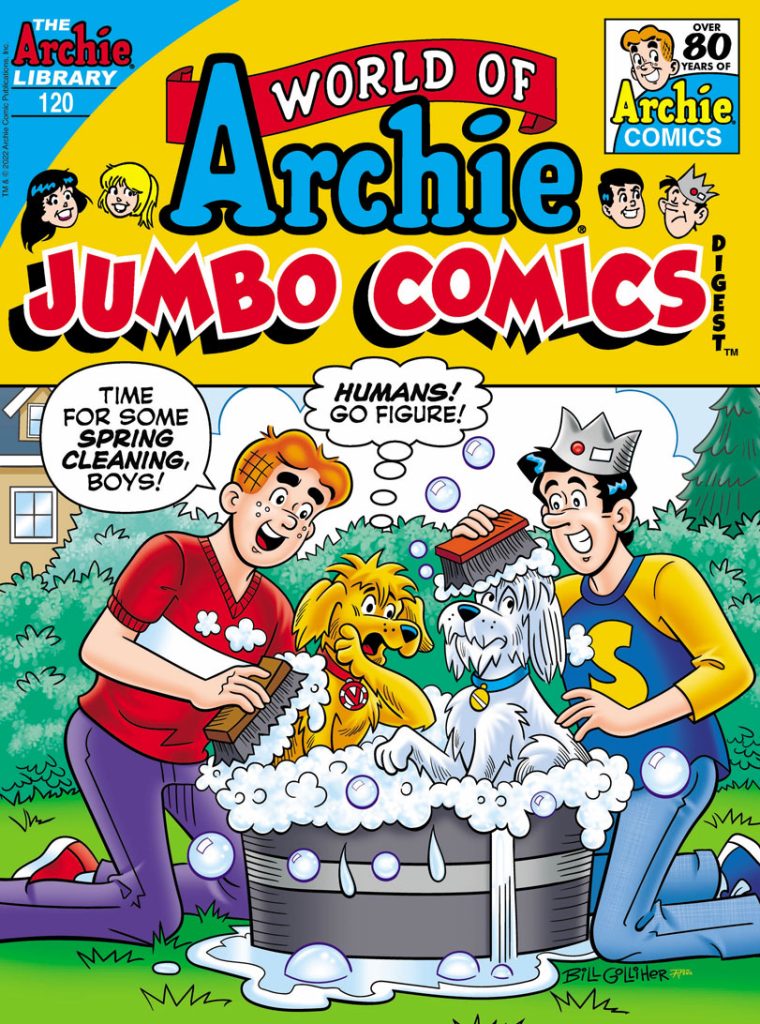 TWO BRAND NEW STORIES: First, in “Beach Party Mystery!” Veronica has invited all of Riverdale High to a party on her father’s private island. Everyone is enjoying the summer fun—until Raj notices that Toni has gone missing! Archie puts on his detective hat and tries to solve the mystery of his missing friend, but will he be able to solve the whodunit?

Then, in “Heat of the Moment,” superhero Fireball finds himself in hot water when the Eliminators come to town—but he’s not alone! Alongside him are the teen superheroes Pureheart the Powerful, Superteen, Powerteen, Captain Hero, and the Equalizer! They must somehow, despite their different personalities and powers, work together to muster up their wits and defeat the evil villains! 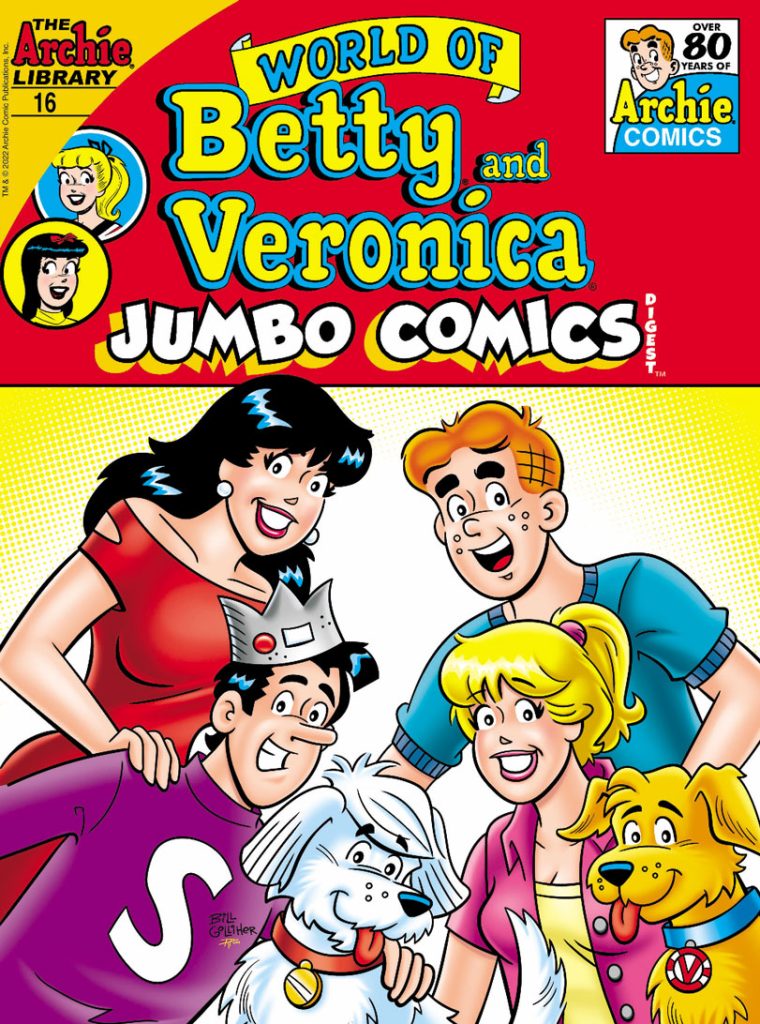 TWO BRAND NEW STORIES: First, in “Put a Cork in it!” Betty and Veronica discover a bottle that washes up on the beach. Thinking there may a note inside, they open it… and a beautiful genie emerges! She doesn’t offer to grant them any wishes but just wants to have a good time after being bottled up for ages. It would be a lot of fun… until she sets her sights on Archie! Can Betty & Veronica successfully get the genie BACK into her bottle?

Then, in “Cheers and Jeers,” Bingo becomes the new critic for the school newspaper, including the student film festival. However, when he gives an anonymous scathing review to a romantic flick that was entered, he finds out it was Samantha’s film! Will she find out who burned her artistic effort, and will Bingo be able to make it up to her without giving away his identity?