Check out the Archie Comics Solicitations for February 2016! 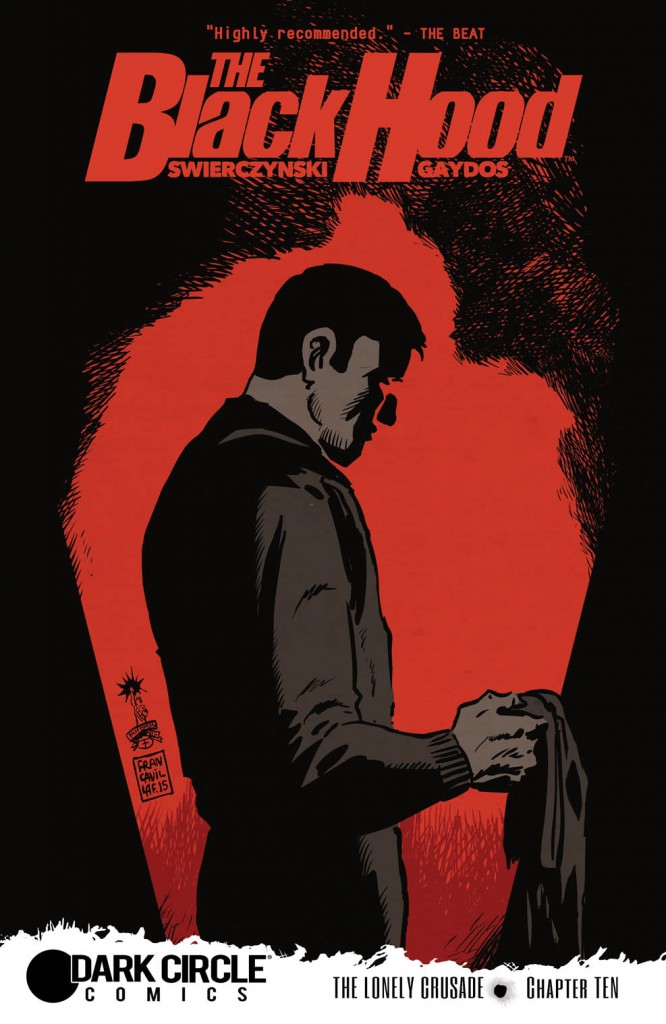 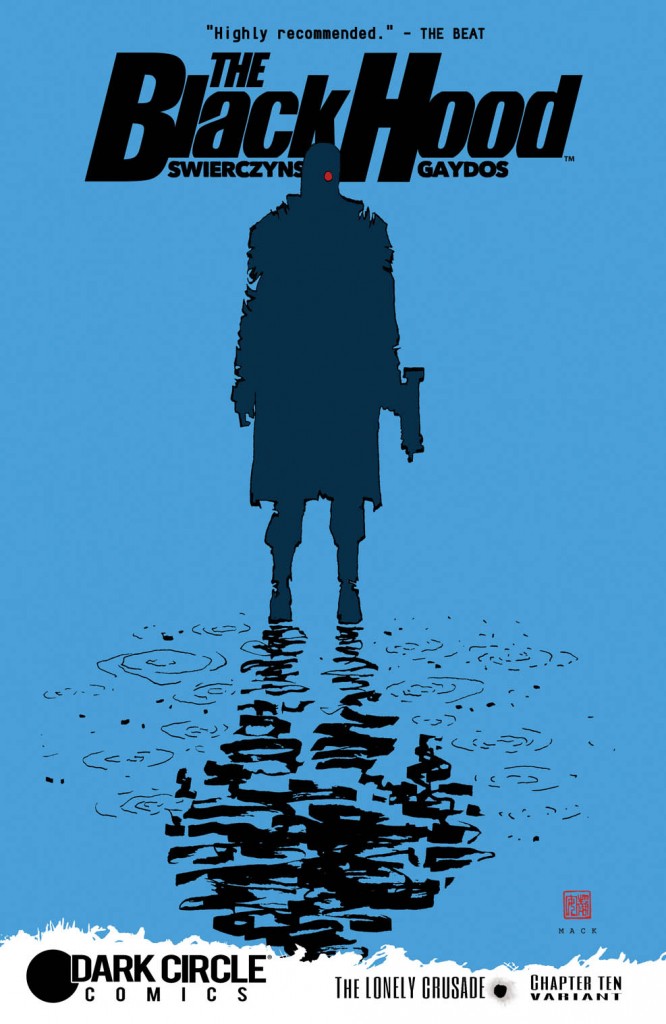 “The Lonely Crusade, Part 4” When he donned the Black Hood, Greg Hettinger swore to keep the awful truth from those he cares about most—his partner Devon, his friend Jessie. But he’s going to have to break those promises if he’s going to survive the death trap that the Crusaders have prepared for him… and nothing will ever be the same. 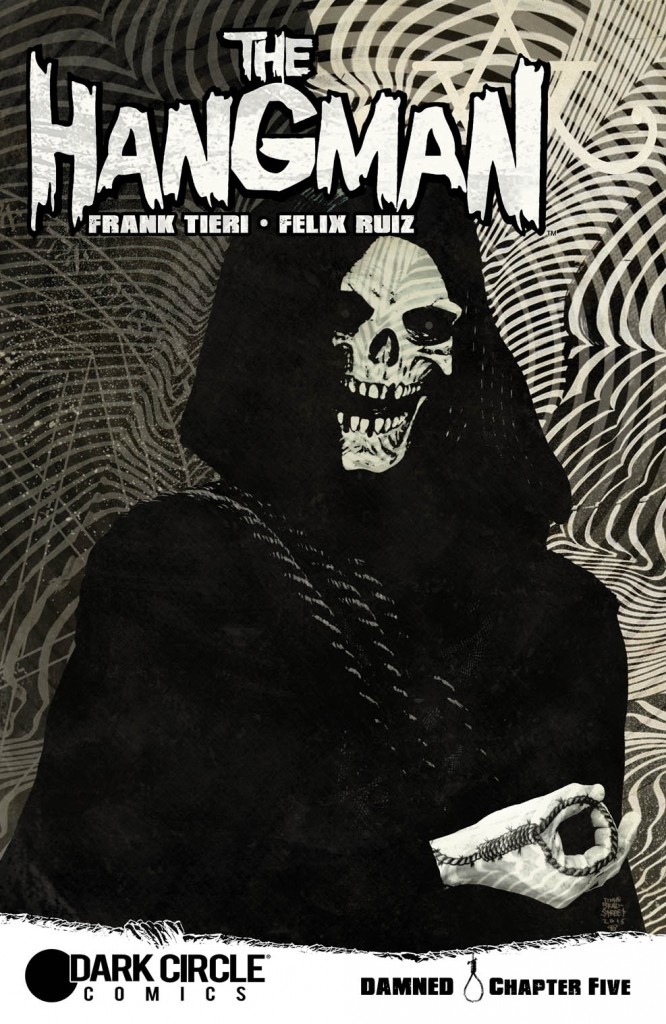 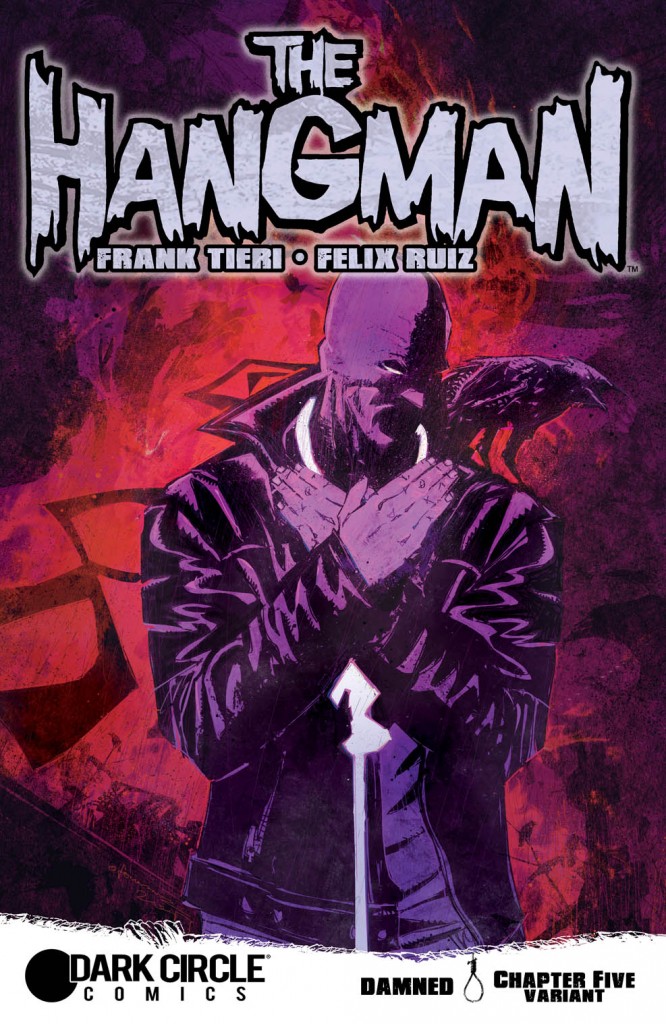 “Damned, Part 5” This is it—a battle that’s been brewing for eons! The Devil vs. Asmodeus! With the fate of the Hangman in the balance! Will the outcome cost Mike Minetta his family… and his soul? Find out as Damned hits its startling conclusion! 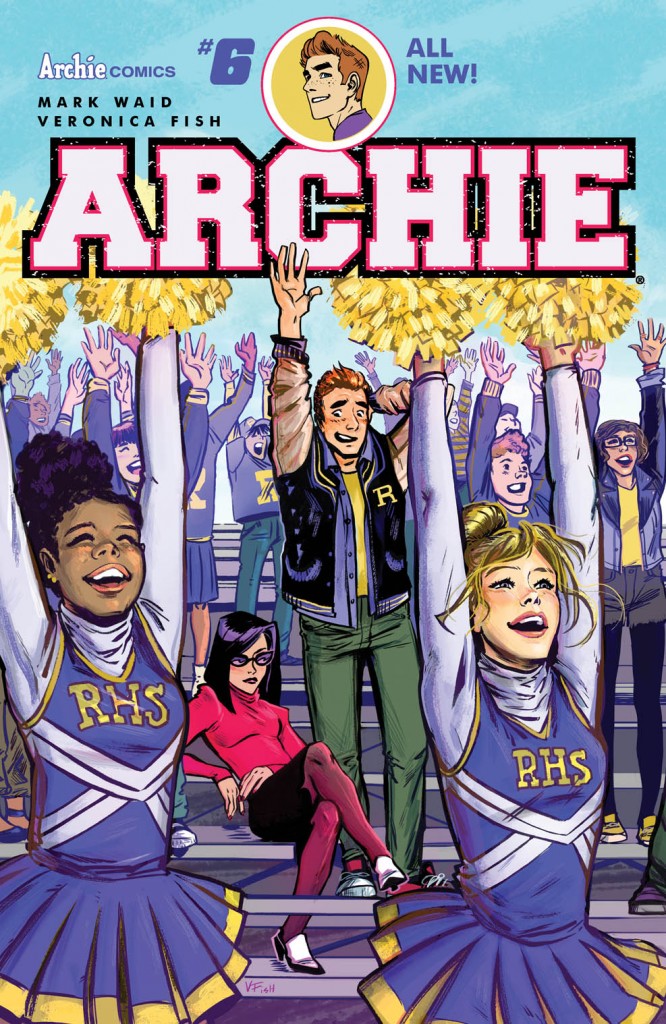 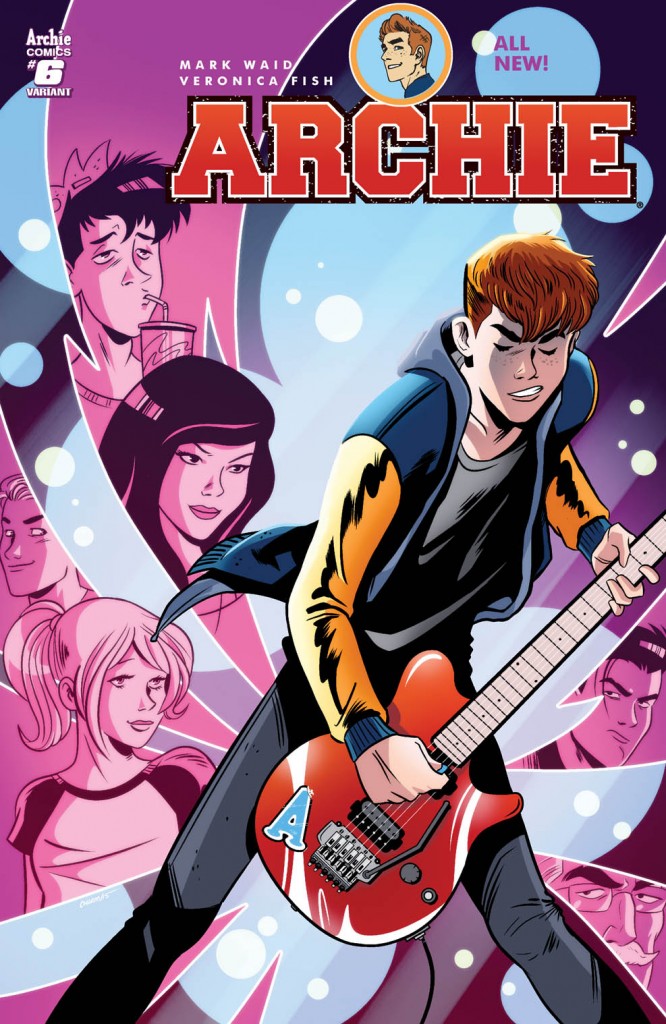 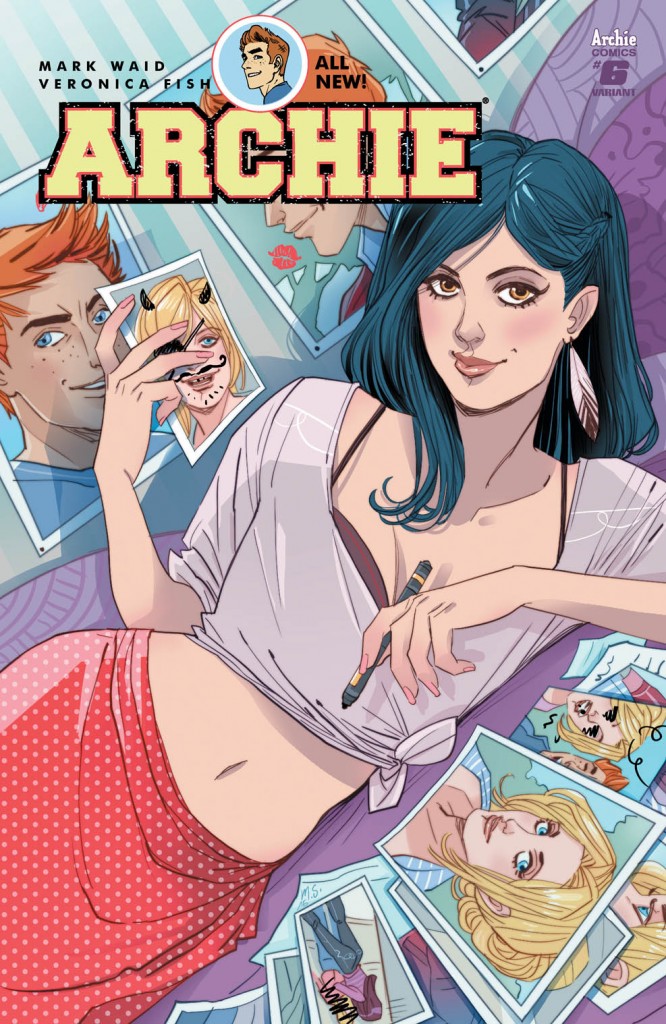 The biggest comic series of the year continues into 2016! Archie and Jughead are on the outs with each other, and now Archie has no one to help him against the fury that is Hiram Lodge!  Not even Veronica wants to go up against her own father!​ Rising star comics artist Veronica Fish (Howard the Duck, the RIVERDALE CW promo image) joins the legendary Mark Waid for another brand new issue of the hit series! 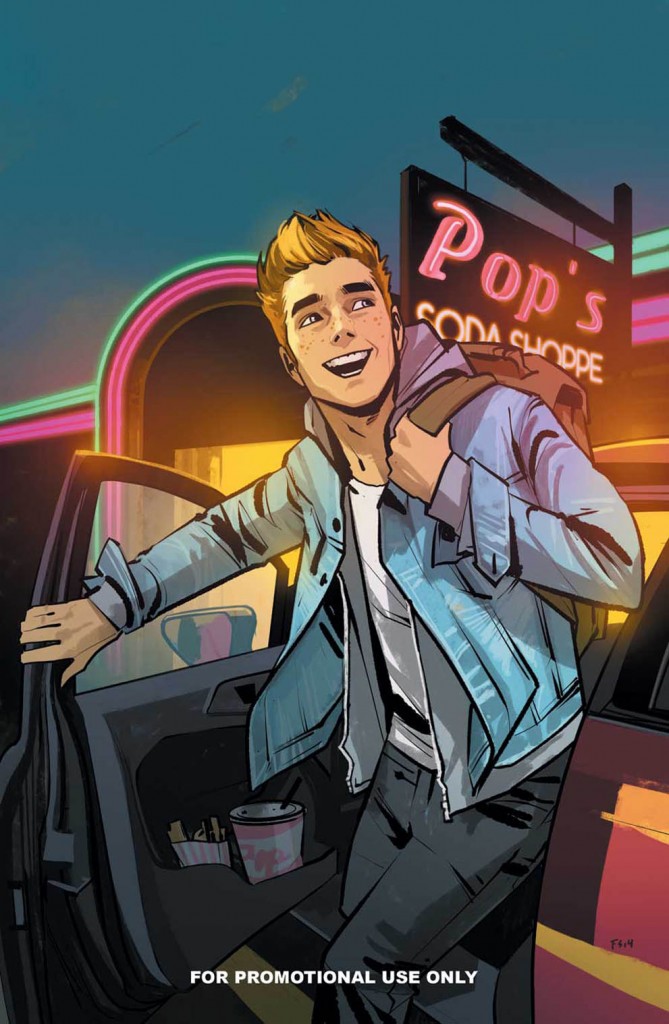 ARCHIE, one of the longest-running titles in comic book history, is rebooted here in this full-color collection that brings together two of the most talented creators in comics, Mark Waid and Fiona Staples. Together they create a surprising and definitive take on the origins of everyone’s favorite redheaded teen and his friends while showcasing the beginnings of the historic love triangle between Archie, Betty and Veronica. The book captures the bite and hilarious edge of Archie’s original tales in a modern, forward-looking manner, while still retaining the character’s all-ages appeal. ARCHIE Vol. 1 collects ARCHIE #1-6 and features bonus content including scripts, sketches and variant covers. 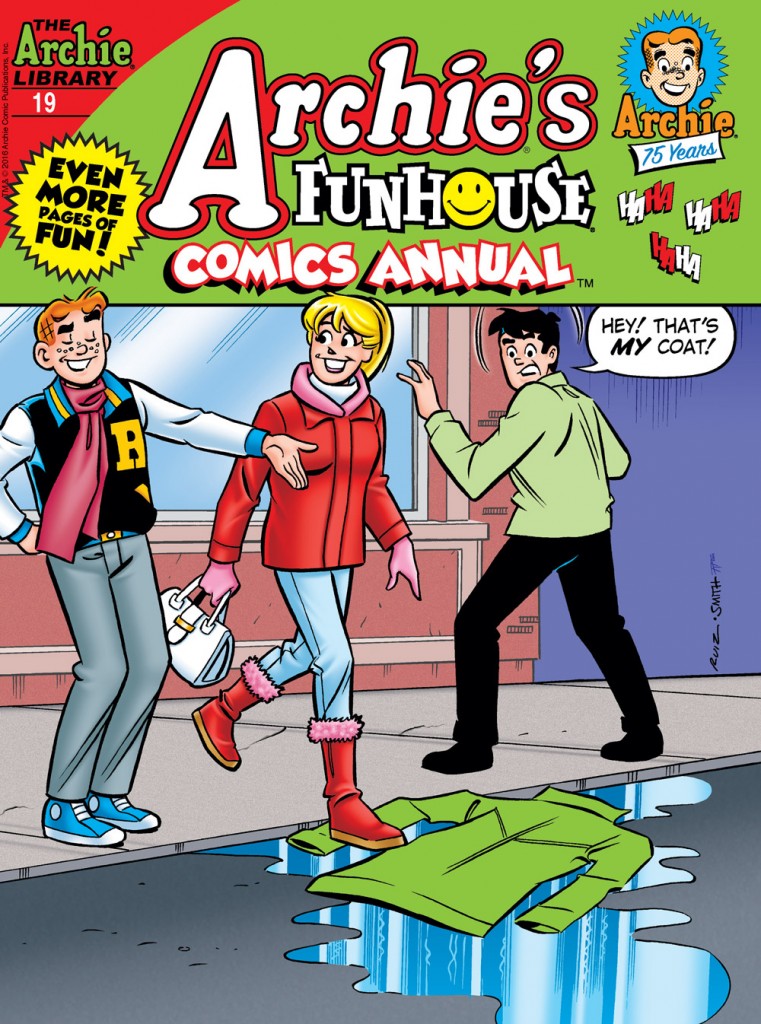 Veronica puts all thoughts of Archie aside when her parents reveal that one of her old friends from summer camp has blossomed into a Hollywood hunk and is coming to their house for a visit. But when Ron gets a glimpse at the tanned California girls this leading man seems to favor, will she go several steps too far to try and transform herself into his ideal love interest? Find out in “Orange You Lovely,” the brand new lead story to this comics annual, featuring even more pages of fun! 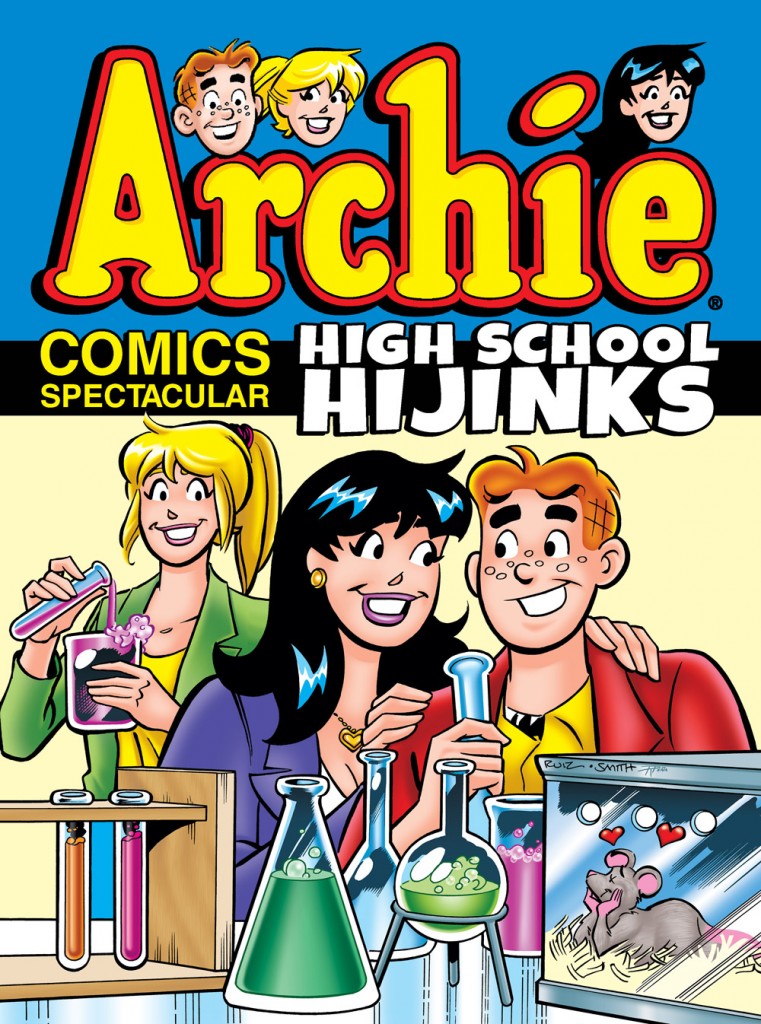 Get ready for some classroom calamity with all of your favorite Riverdale High School students! This edition collects the best high school stories from Archie and his friends! This fun, pocket-sized collection features 128 pages of hand-picked, favorite school-centric stories, presented in high-quality, bright white paper with a cardstock cover. 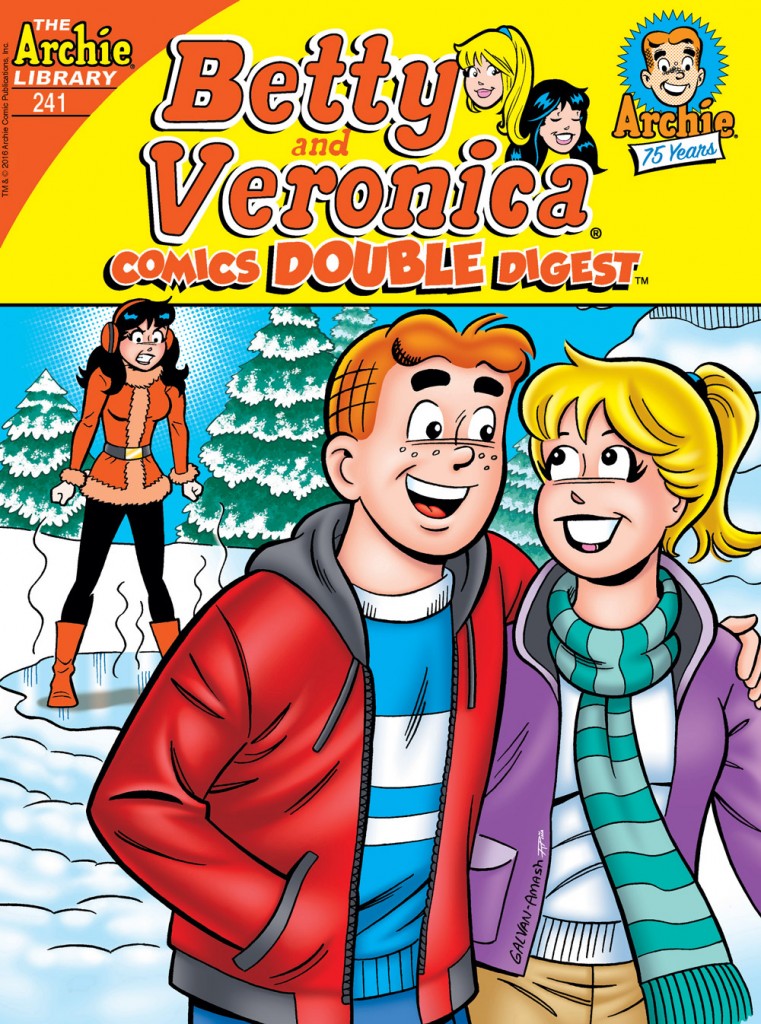 This time in “the Many Loves of Archie Andrews,” Archie has decided to set his sights on Sabrina the Teenage Witch! And, after being dumped by her long-time boyfriend, Harvey, Sabrina’s ready to move on—and our red-headed Romeo is just the mortal to do the trick! There’s only one person who’s standing in the way of true romance—actually, make that two people—Sabrina’s aunts Hilda and Zelda! If you think Mr. Lodge and Archie have clashed before… wait until you see Archie vs. Zelda and Hilda in “Witch Way Out?” the brand new lead story to this comics double digest! 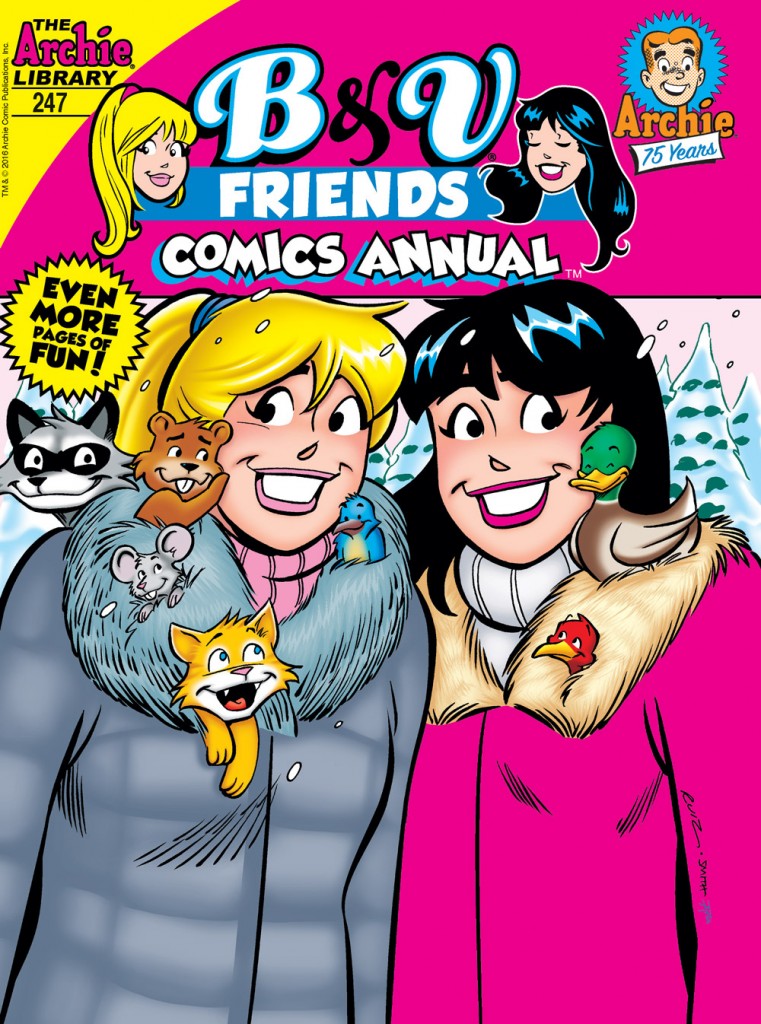 Betty and Veronica just can’t agree who has the more difficult life. Betty says that her financial status means she has to work extra hard, while Ronnie says that her parents put a lot of pressure on her to measure up to the Lodge family name. There’s only one way to settle this argument: by trading places for a day! When the girls have to walk in each other’s shoes, what will they learn about their BFF—and themselves? Find out in “Room for Improvement,” the brand new lead story to this comics annual featuring even more pages of fun! 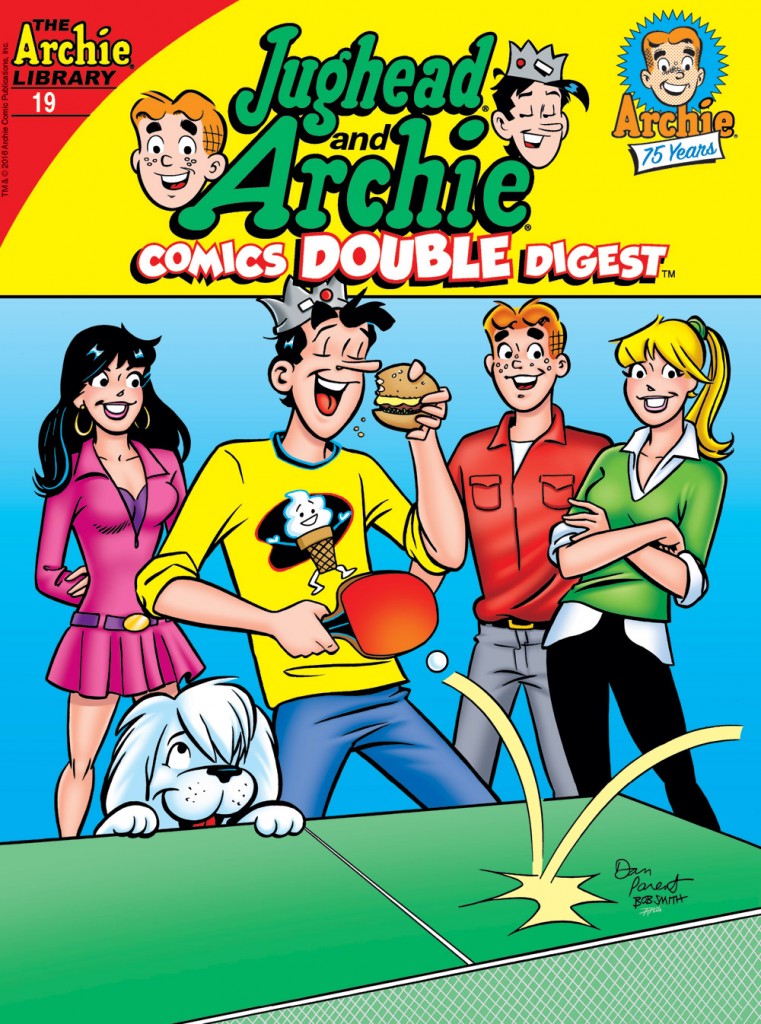 When Mr. Lodge needs some assistance fixing up Lodge Manor, Archie and Jughead offer to help make some repairs. Mr. Lodge isn’t sure he trusts them, but with the power of “how-to” videos on MyTube, Archie promises that they can fix anything—and for free! Will Archie and Jughead be regular fixer-uppers, or will Mr. Lodge end up getting exactly what he paid for? Find out in “Fixit Friends,” the hilarious lead story to this comics double digest! 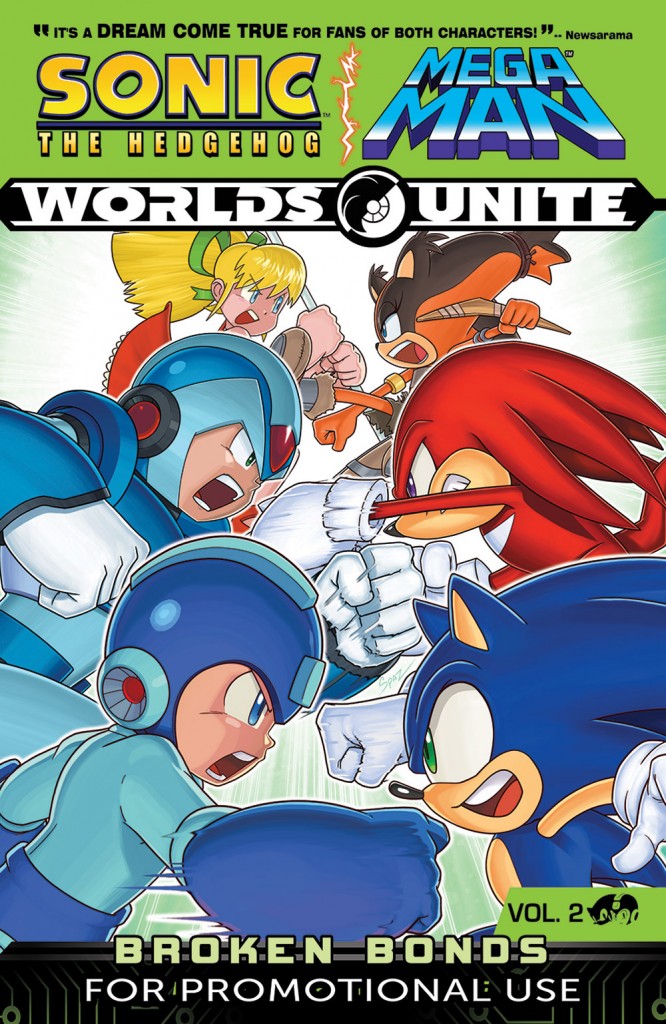 The sequel to the record-shattering Sonic the Hedgehog and Mega Man crossover is here! You saw what happened when “Worlds Collide!” Now brace yourself for when WORLDS UNITE! Sigma—the brilliant villain from the future—has fused the worlds of Sonic the Hedgehog and Mega Man together! Now he feeds on the super-planet’s energy to become unstoppable! It’s up to Sonic and Mega Man to raise an army to fight the time-hopping villain. Joining them are the Freedom Fighters, the Robot Masters, X and his Maverick Hunters, Sticks and her friends, and—Dr. Eggman and Dr. Wily?! But it won’t be easy, as Sigma uses his powers to reach across space and time to recruit an army of his own! It’s a battle of epic proportions to save the Unified World! Featuring the introduction of the STREET FIGHTER cast, including Ryu, Chun-Li, Guile and Ken! This volume collects WORLDS UNITE parts 5-8, including SONIC UNIVERSE #77, SONIC BOOM #9, SONIC THE HEDGEHOG #274, MEGA MAN #51 and selections from the MEGA MAN: WORLDS UNITE BATTLES and SONIC THE HEDGEHOG: WORLDS UNITE BATTLES plus special features! 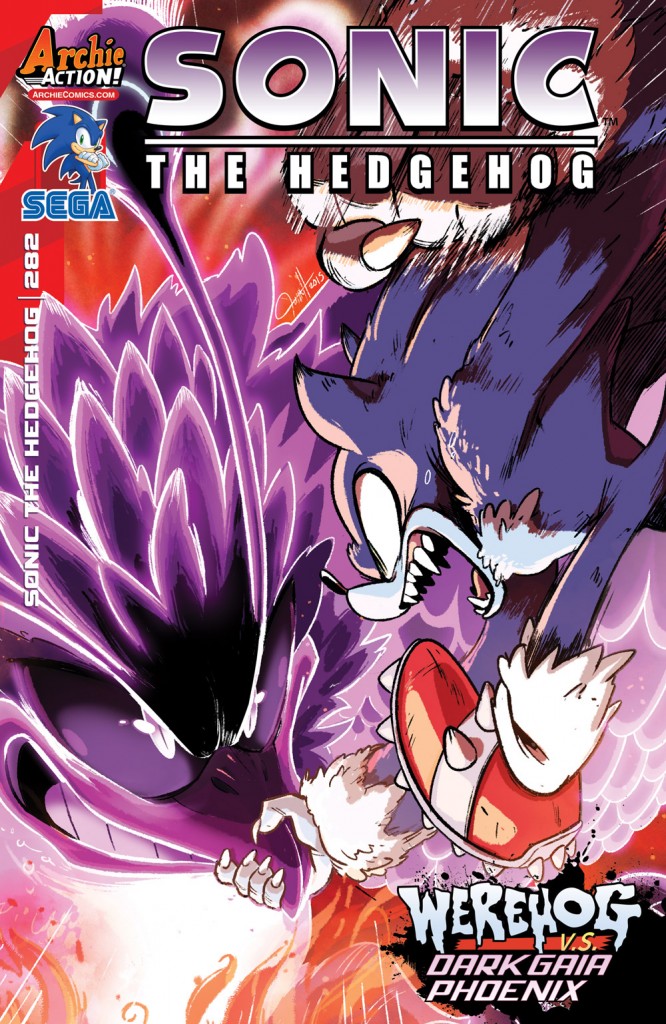 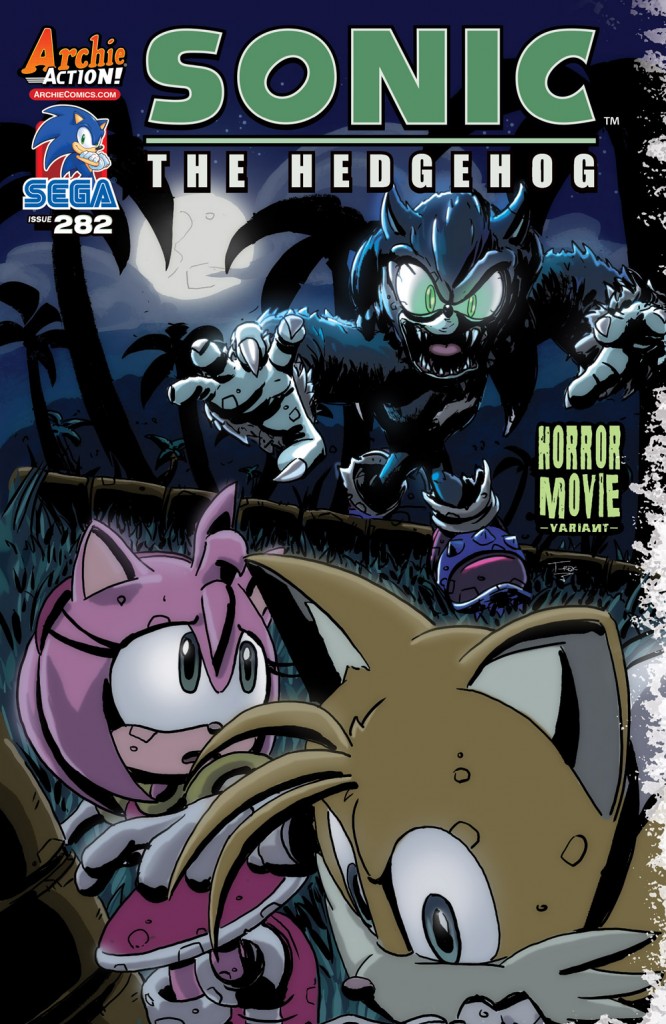 SONIC fights FIRE with FURY in “Wings of Fire” Part Two: When Sonic was infected with the Dark Gaia energy, he nearly all lost control of his mutant Werehog form. So what happens when an ancient and powerful phoenix gets turned to the dark side?!  It’s a three-way battle as Sonic and Dulcy’s teams battle for their lives against the Dark Gaia Phoenix and Egg Army! Then, in “Shards and Sparks,” Knuckles and Mighty reunite to take on Egg Boss Thunderbolt! Featuring cover art by the terrific Tyson Hesse and a spooky “Horror Movie” variant by the mega-talented T. Rex! 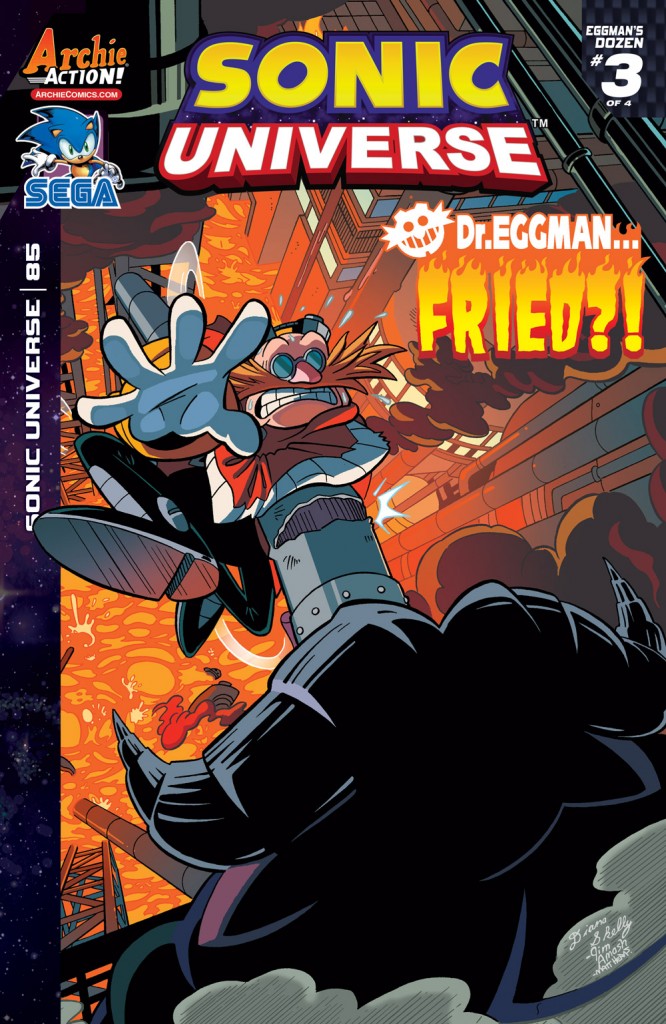 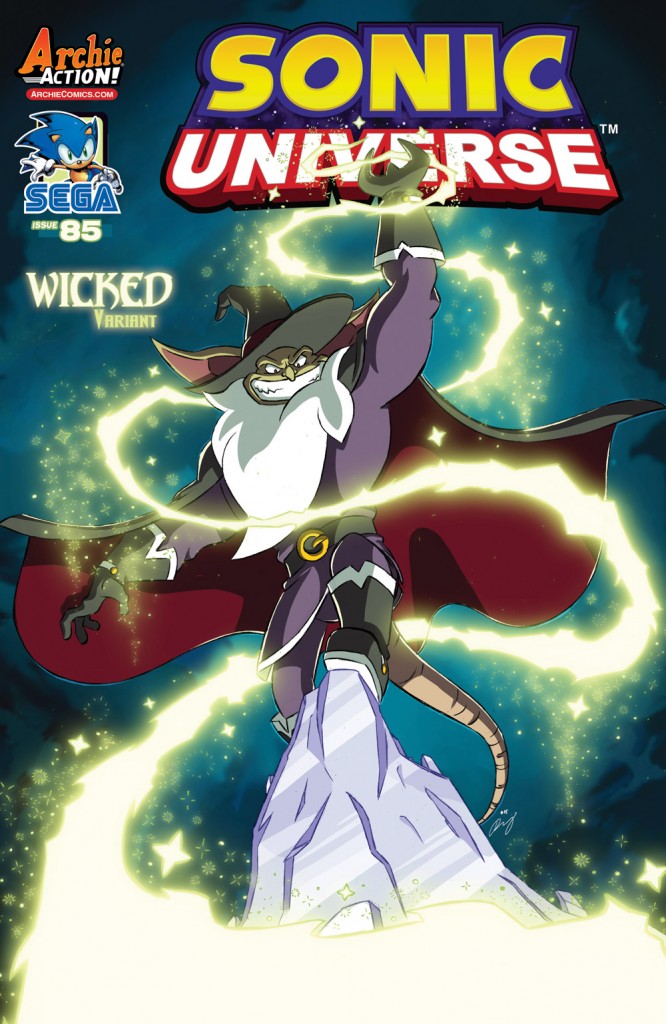 Dr. EGGMAN gets CRACKING in “Eggman’s Dozen” Part Three: Dr. Eggman has assembled his evil Egg Bosses to take back his Egg Refinery from the Naugus Twins! The plan seems straight forward enough, but what happens when the Eggman’s minions can’t work together? Can the mad doctor scramble to survive or will his shaky alliances leave him fried? Featuring egg-tastic cover art by dynamite Diana Skelly and a wonderfully “Wicked” variant cover by artist supreme Dan Schoening!