Archie Horror launches a “Month Of Mayhem” this fall!

Four one-shot horror comics anthologies by some of the industry’s top creators roll out in October!

Archie Comics is taking over Spooky Season with four all-new horror comics launching in October, also known as Archie Horror’s Month of Mayhem! Headlined by a sequel to last year’s CHILLING ADVENTURES IN SORCERY, the rest of the lineup includes campfire tales for kids, an ’80s-tinted solo adventure for Sabrina’s cat Salem, and a Twilight Zone-esque flight into the sci-fi side of horror.

RESERVE YOUR COPY OF THE LAUNCH COMIC TODAY!

Archie Comics Senior Director of Editorial Jamie L. Rotante said, “Who ever thought Archie Comics and horror would go so well together? We did—but it definitely took a lot of other folks by surprise! Since AFTERLIFE WITH ARCHIE’s debut way back in 2013, we’ve been consistently delivering on unique horror stories featuring our cast, and we have no plans on stopping that any time soon! We’re so excited to bring everyone ‘Archie’s Month of Mayhem’ for the Halloween season. We’ve got something for everyone—three brand new horror one-shots and a middle grade horror anthology!” 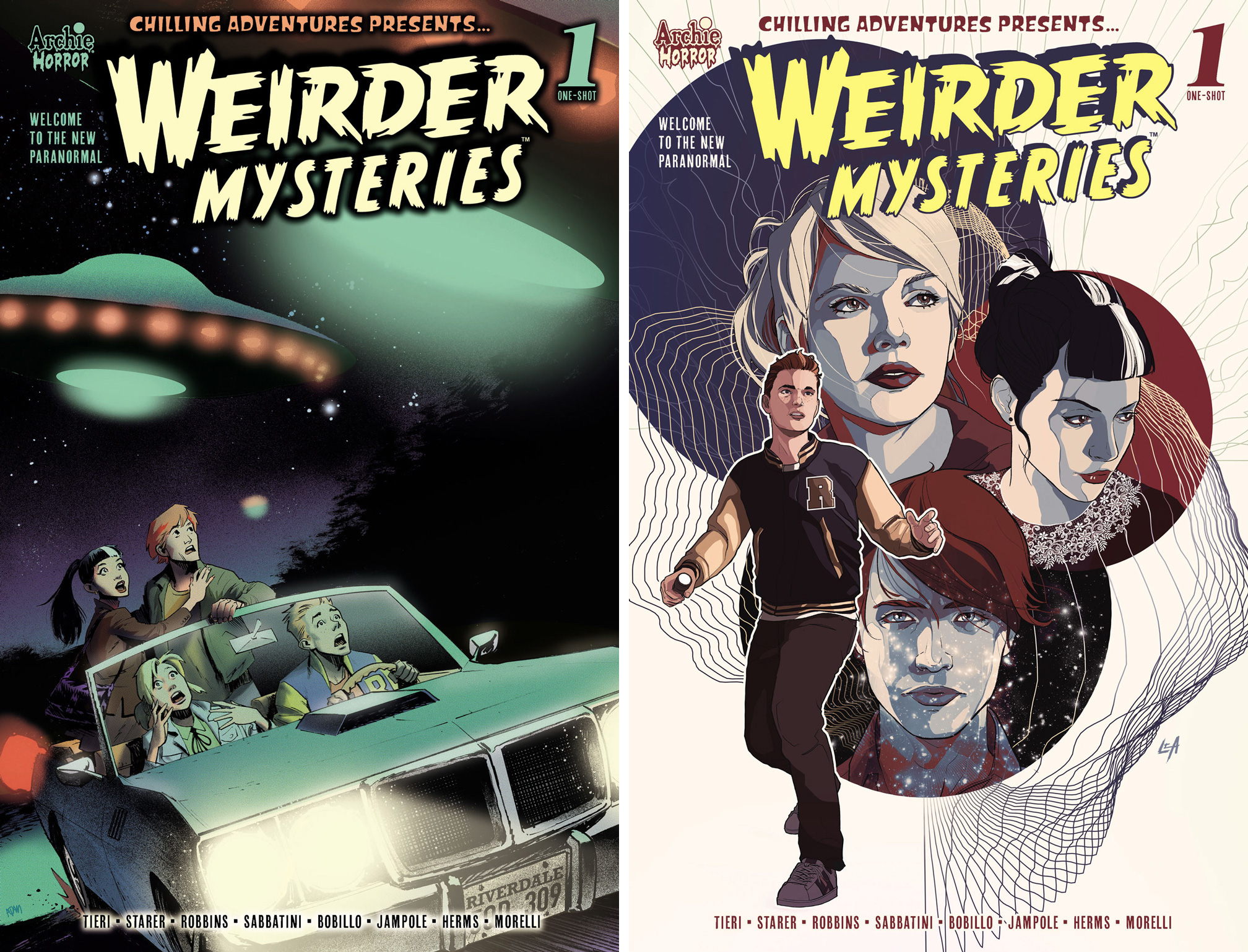 Leading the initiative in late September, CHILLING ADVENTURES PRESENTS . . . WEIRDER MYSTERIES is a trio of dark sci-fi tales kicked off by writer Frank Tieri (Deadpool) in a welcome return to the universe of his previous hit Archie Horror series, with art by Federico Sabbatini (Moon Knight). Tieri said, “In ‘Betty Cooper: Alien Hunter,’ a spine-tingling tale set in the JUGHEAD: THE HUNGER universe, we’ll find the fan-favorite werewolf hunter trade in her silver bullets for a UFO detector as she tries to uncover a mystery that’s not of this world. But in typical Betty Cooper fashion, she may be the bigger threat to the good folks of Riverdale than anything any E.T. can dole out.”

The issue is rounded out with two stories written by Joanne Starer (Sirens of the City) and Ron Robbins (Archie Digest Library) with art by Juan Bobillo (Fantastic Four) and Ryan Jampole (Sonic the Hedgehog), featuring rare appearances by Bingo Wilkin, star of the ’70s comic series THAT WILKIN BOY, and Alexandra Cabot, a foil for Josie and the Pussycats. 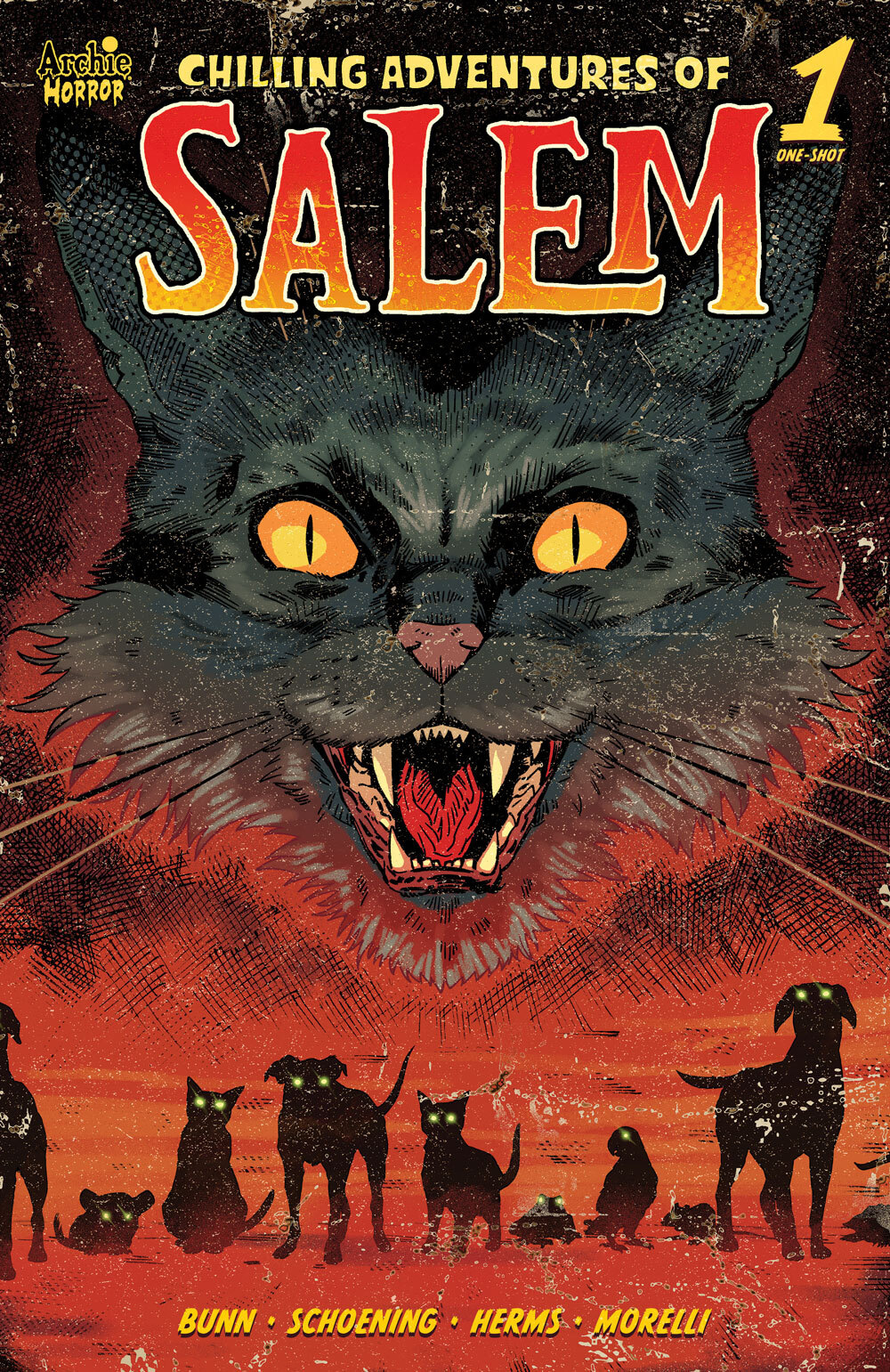 Archie Comics’ beloved teenage witch Sabrina Spellman is no stranger to Archie Horror, having headlined her own comic, CHILLING ADVENTURES OF SABRINA, that spawned a Netflix streaming series. Like any good witch, Sabrina has a magical feline familiar named Salem, and now, horror-loving cat fanciers will have something to celebrate on October 12 when he stars in his first solo title, CHILLING ADVENTURES OF SALEM! Written by comics horror master Cullen Bunn (Harrow County) with evocative nostalgic “horror paperback” art by Dan Schoening (Ghostbusters), the one-shot follows Salem as he helps neighborhood animals exact revenge on those who’ve caused them harm. 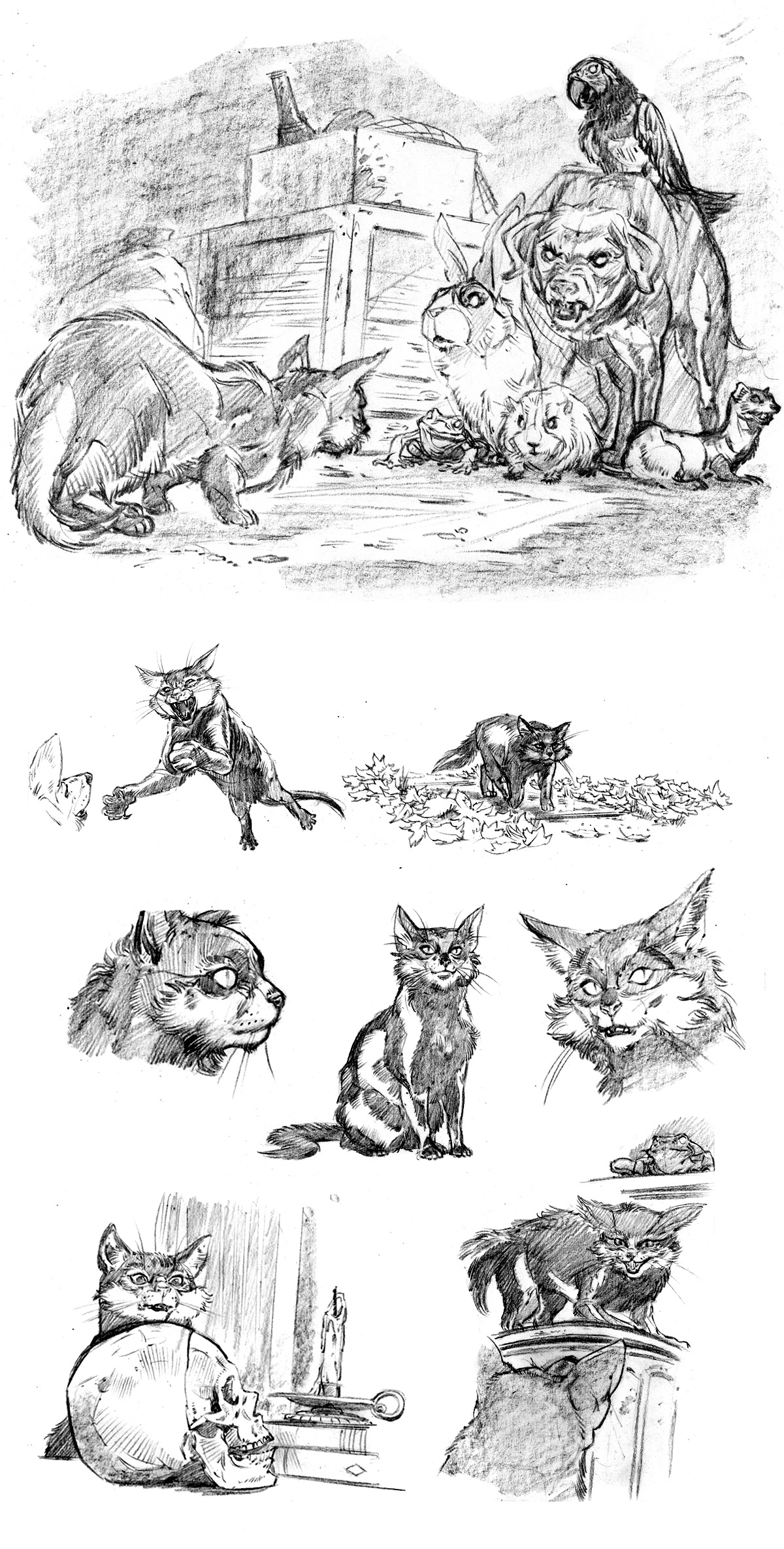 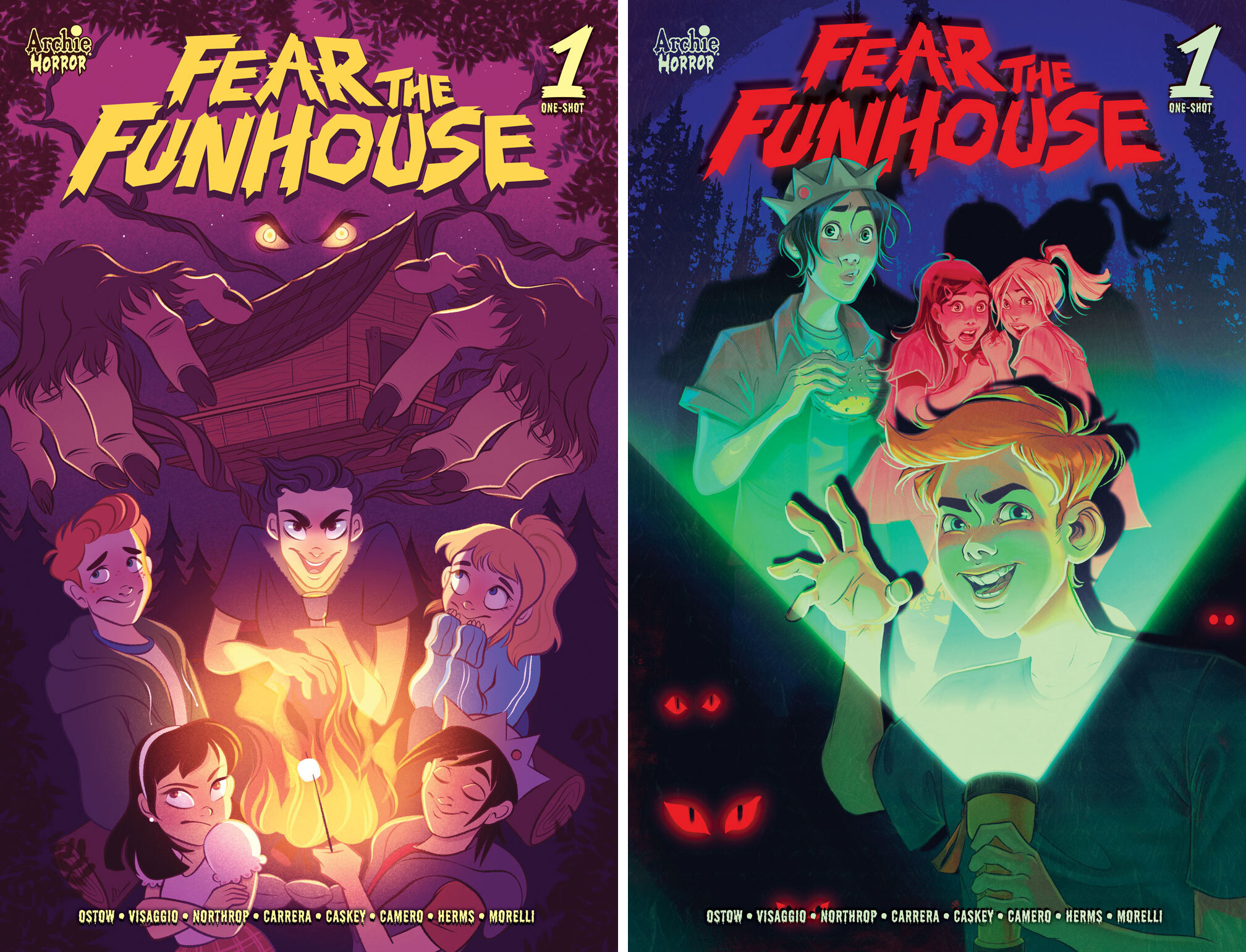 Archie Horror’s first foray into middle grade chills debuts October 19 with FEAR THE FUNHOUSE! Inspired by genuinely scary children’s horror like Goosebumps and Are You Afraid of the Dark?, the one-shot anthology features a framing sequence in which younger versions of the core Archie Comics cast tell each other increasingly terrifying stories by a campfire. It boasts three stories written by Micol Ostow (Riverdale), Magdalene Visaggio (Eternity Girl), and Michael Northrop (Teen Titans Go!) with art by Lisette Carrera (Lore Olympus), Ryan Caskey (The Spooky Tarot), and Diana Camero (Five Nights At Freddy’s). 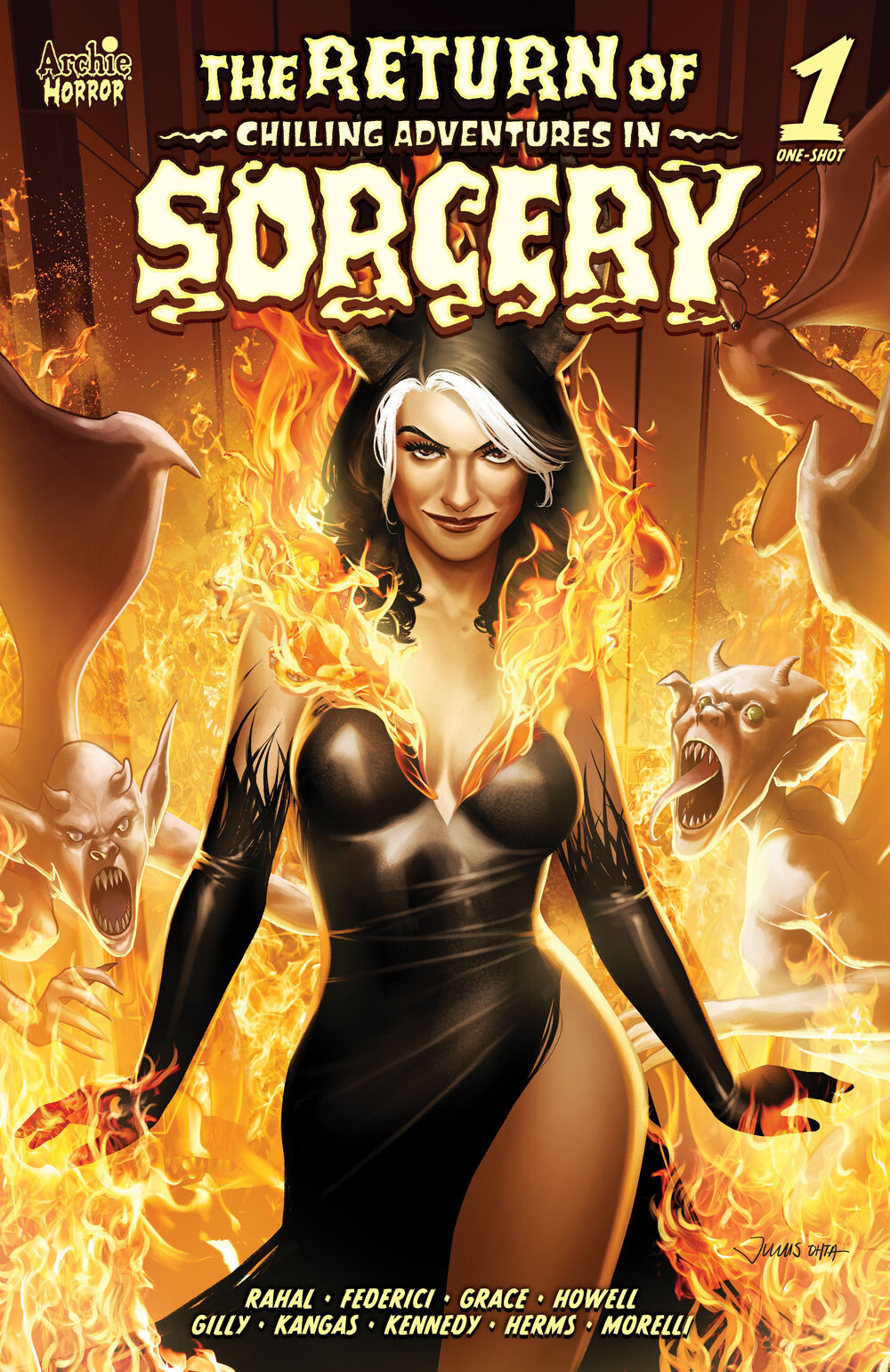 Rounding out Archie Horror’s inaugural Month of Mayhem on October 26 is THE RETURN OF CHILLING ADVENTURES IN SORCERY, a direct sequel to last year’s smash hit one-shot starring the iconic Sabrina villain, Madam Satan! Our titular anti-hero has escaped Hell and is on the loose, but not for long; Satan is on the hunt and she’s now hiding in Baxter High, posing as the school’s principal. Each classroom seems to be a portal back to Hell — and our window into a new scary story — culminating in a climactic showdown. Original framing sequence writer Eliot Rahal returns to pick up the thread here, along with writers Sina Grace (Iceman) and Casey Gilly (Dungeons & Dragons), and artists Vincenzo Federici (TMNT: The Armageddon Game), Corin Howell (Transformers), and Liana Kangas (Star Wars Adventures).

CHILLING ADVENTURES PRESENTS… WEIRDER MYSTERIES is available for pre-order now from only the most haunted comic shops, and the rest of the Month of Mayhem lineup will be open to order at the end of July!