Archie fights for survival in a post-apocalyptic new comic! 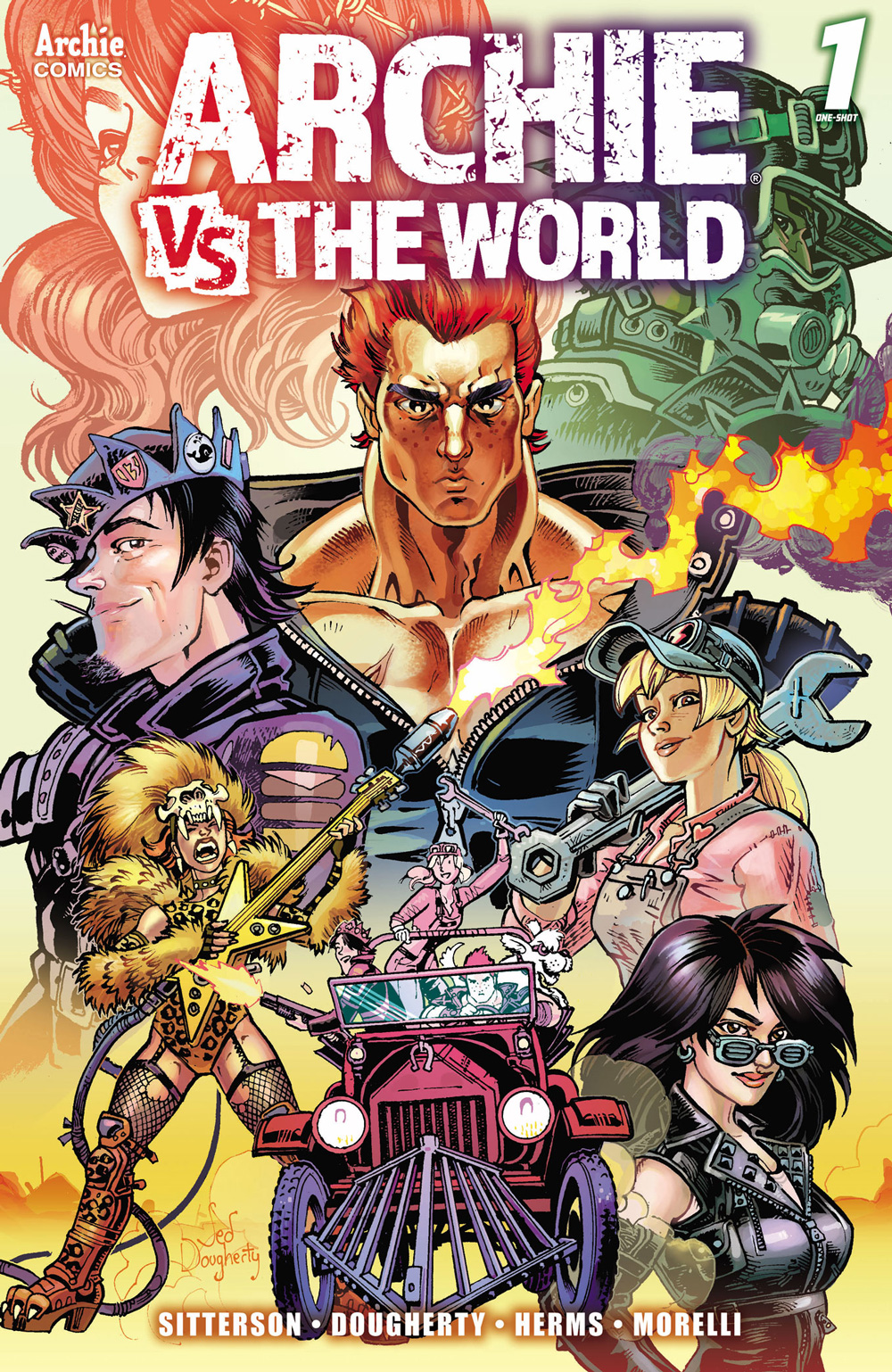 ARCHIE VS. THE WORLD main cover by Jed Dougherty

The one-shot sci-fi action epic ARCHIE VS. THE WORLD hits stores in January

Archie Comics looks into the future—and it’s not great!—in an all-new one-shot comic, ARCHIE VS. THE WORLD, hitting store shelves in January! The blockbuster sci-fi special pits Archie and pals against a post-apocalyptic wasteland where only the strong survive, in a pedal-to-the-metal brawl that could only be told by writer Aubrey Sitterson (No One Left to Fight) and artist Jed Dougherty (Savage Hearts).

“ARCHIE VS. THE WORLD is unlike anything we’ve ever done before, both visually and in terms of the story itself,” said Archie Comics Senior Director of Editorial Jamie L. Rotante. “I have the utmost faith in Aubrey and Jed’s ability to tell a story that’s not only fantastical but can also feature major kickass moments—and yet the two still managed to blow me away page after page.”

Sitterson and Dougherty last teamed up on a story in THE BEST ARCHIE COMIC EVER one-shot called “Jughead the Burgarian,” another wild take on the Riverdale cast of characters in a totally unexpected setting. ARCHIE VS. THE WORLD will be the pair’s first solo title from Archie Comics.

“After the fantastic reception to ‘Jughead the Burgarian,’ the brilliant Jamie Rotante was eager to get Jed and I doing a full one-shot at Archie,” Sitterson said. “It was actually her suggestion to do something that riffs on Fury Road and, as an avowed fan of the Mad Max series, I was stoked for the challenge.”

ARCHIE VS. THE WORLD sees Archie face off against Reggie in a brutal (and hilarious!) fight for control of a secret water source, prized for its rarity in the devastated future setting. The gang uses souped-up vehicles and weapons to eke out their existence, including a radically customized version of Archie’s classic broken down jalopy which will be familiar to longtime fans of the 80-year-old publisher. Each page-turn heightens the spectacle as more iconic Archie characters and concepts are introduced, including reimagined versions of Sabrina the Teenage Witch and Josie and the Pussycats.

“Archie, Betty, Veronica, Jughead . . . they aren’t merely characters; they’re archetypes,” Sitterson said, explaining his approach to the story. “It’s a credit to the many creators who have depicted them over the years that not only does each Archie character have well-defined, easy-to-grasp personalities but physical appearances that are just as iconic and distinct. As a result, not only is it a cinch to pick them up and plop them into diverse, unexpected genres but doing so is a huge part of the fun.”

Rotante agreed, saying, “This is the biggest head-turner of a comic we’ve done so far and jams the most action into 20 pages I’ve ever seen in my life. I can’t wait for everyone to get their hands on this; it’s guaranteed to have readers talking for a long time after.”

ARCHIE VS. THE WORLD, with colors by Matt Herms and lettering by Jack Morelli, releases January 18 in comic shops nationwide and is available for pre-order now. It will feature a cover by Jed Dougherty and an open-to-order variant cover by Aaron Lopresti. 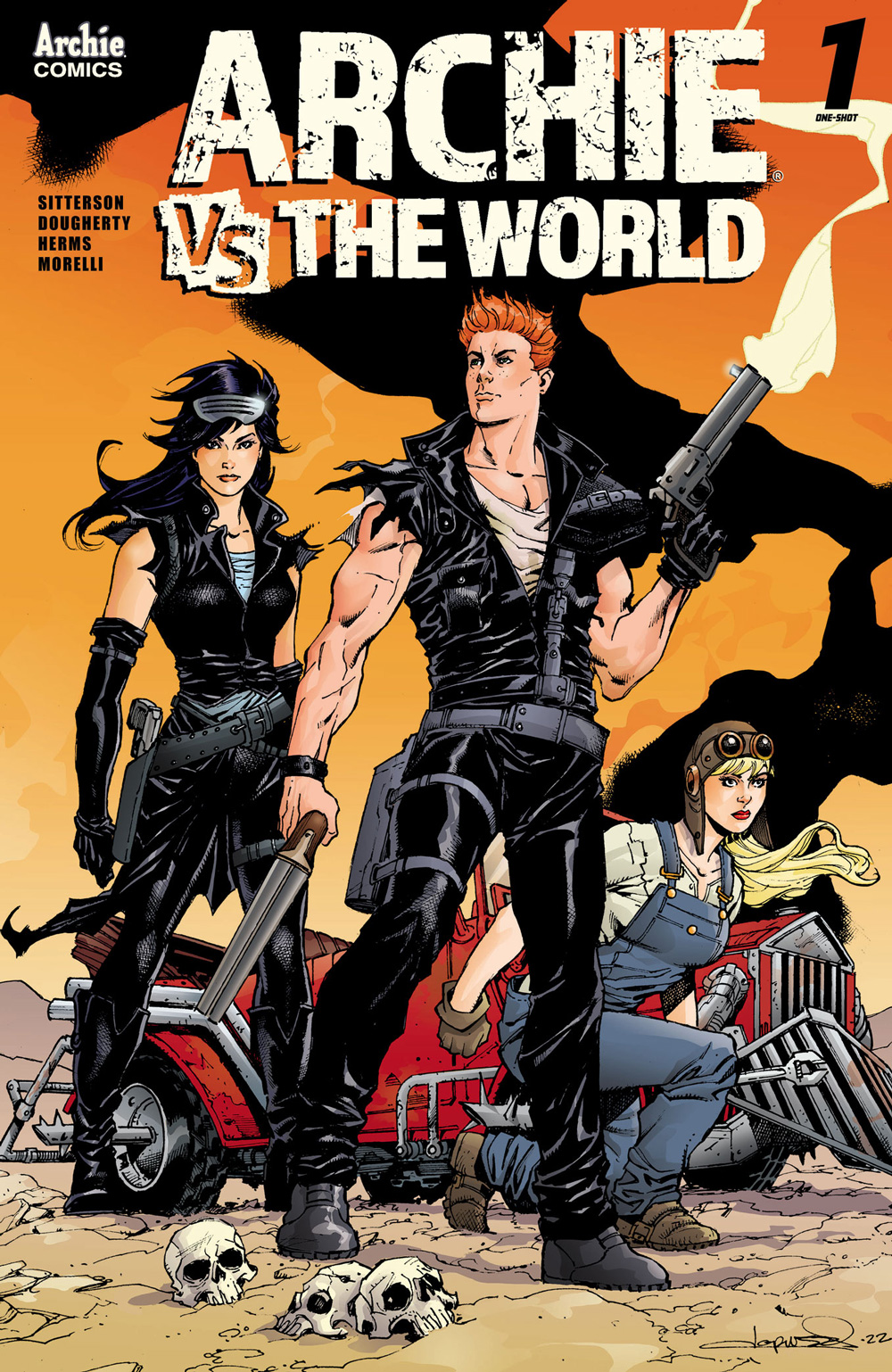 ARCHIE VS. THE WORLD variant cover by Aaron Lopresti

ARCHIE VS. THE WORLD (ONE-SHOT)

In a post-apocalyptic future, our hero Archie Andrews is cursed to walk the world alone—well, alone with his souped-up jalopy. But Archie can defend himself—in fact, he’s the master of a brutal, deadly form of martial arts and must use his skills when he comes face-to-face with his rival and evil mirror image, Reggie. This action-packed one-shot is equal parts Mad Max: Fury Road and The Fist of the North Star, and reunites the “Jughead the Burgarian” team from the smash-hit comic THE BEST ARCHIE COMIC EVER!