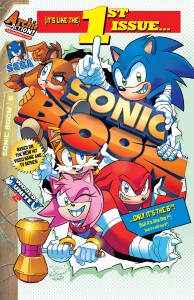 What…What is that sound? No, really—what on earth is that noise? Waitaminute… is that the sound of go-karts??? IT… IT—IS! LET THE RACE BEGIN IN “EVERYBODY’S SUPER SONIC RACING” PART ONE! (IS THE CAPS LOCK STILL ON, OH WAITAMINUTE, there we go. Much better.)  When Dr. Eggman sponsors a go-kart race around Sonic’s Island home, you know that dude is up to no good. The rules are as follows: no special powers, no weapons, and everyone has to drive a kart to keep things fair.  Since when does Eggy care about “fair”? What will happen to throw this race into a SPIN? How many rhetorical questions can we ask in one paragraph of solicit text?? Find out in this hyperbole-packed issue! Featuring cover art from Sonic comic extraordinaire Tracy Yardley, plus a new BOOM-Crew Sega art variant! 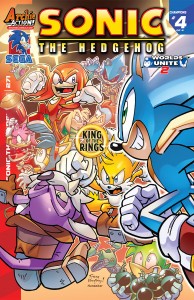 Grab a front row seat for the finale to the brawl-iest, punch-iest, contest-iest Sonic comic saga yet! “Champions” Part Four: It’s the battle you’ve all been waiting for (again!): Sonic versus Knuckles—for the title and the Chaos Emerald!  The old rivalry blazes to life as the True Blue and Rad Red throw down for glory—and for the fate of the entire world!  But with the vengeful Hooligans waiting in the shadows, and Metal Sonic en route, will they even get to finish their fight, or will their foes beat them to the punch? Featuring new cover art from Sonic art legend Tracy Yardley and a super-special new ARCADE VARIANT by the latest Sonic art superstar RAFA KNIGHT!