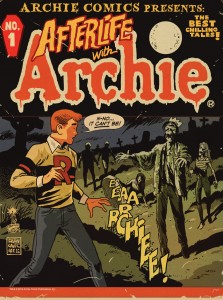 AFTERLIFE WITH ARCHIE MAGAZINE #1
“Escape From Riverdale”—This is how the end of the world begins… Harvey Award-winning writer Roberto Aguirre-Sacasa and Eisner-winning artist Francesco Francavilla take Archie and the gang where they’ve never been before—to the grave and back! A horrific accident sets off a series of grim events and Sabrina the Teenage Witch must try to repair the unspeakable evil her spell has unleashed. Gasp in horror as Riverdale faces an impending zombie Arch-pocalypse in the first issue of the magazine-size edition of the hugely successful, award-winning AFTERLIFE WITH ARCHIE series, featuring all new special features. For TEEN+ readers.
Script: Roberto Aguirre-Sacasa, Vicente Alcazar
Art: Francesco Francavilla, Jack Morelli, Robert Hack, Vicente Alcazar, Jim Mooney & Gray Morrow
PREVIW
SUBSCRIBE
DIGITAL 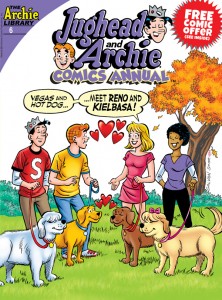 JUGHEAD AND ARCHIE COMICS ANNUAL #6
The Riverdale Fall Festival is here, and Jughead’s unable to partake in the one activity he loves most—enjoying his food! Falling leaves provide a scenic backdrop and who doesn’t love jumping into piles of them—but there’s one disadvantage—getting them in your food! Will autumn finally leave Jughead alone and let him eat in peace? Find out in “The Fall of Jughead and Archie,” the hilarious, NEW first story to this fall-flavored Comics Annual!
Script: Craig Boldman
Art: Various
Cover: Bill Galvan, Bob Smith, Rosario “Tito” Peña
On Sale Date: 10/22
192-page, full color comic
$5.99 U.S.
PREVIW
SUBSCRIBE
DIGITAL 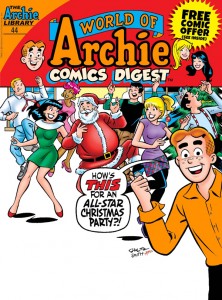 WORLD OF ARCHIE COMICS DIGEST #44
The holidays are in full swing at Riverdale High, and Archie is determined to be Veronica’s Secret Santa. When he pulls someone else’s name, he has no choice but to find out who has Veronica so he can switch with them. This leads him on a wild goose chase around school—it turns out a lot of people wish they had picked someone else, and it sets off a chain-reaction of switching names! Will he ever find out who is the mystery person who picked Veronica’s name? Find out in “Secret Santa Secret Swap,” the brand new lead story to this Christmas comics digest!
Script: Paul Kupperberg
Art: Fernando Ruiz, Jack Morelli
Cover: Jeff Shultz, Bob Smith, Rosario “Tito” Peña
On Sale Date: 10/22
160-page, full color comic
$4.99 U.S.
PREVIW
SUBSCRIBE
DIGITAL 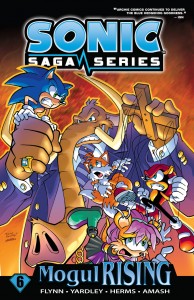 SONIC SAGA SERIES 6: MOGUL RISING (TR)
It’s SONIC VERSUS EVERYBODY! Blast into the action at Sonic speed with the continuation of the all-new Sonic Saga graphic novel series! In this volume, Sonic battles the ancient, evil Mammoth Mogul—who has lost his Chaos Emerald and been imprisoned, but backing him into such a corner only made him more dangerous! Mogul uses his remaining powers to summon a new Fearsome Foursome—and Sonic is forced to be one of them! Every mercenary and cut-throat is hired to take Sonic’s shoes—feet being optional! It’s Sonic versus everyone else while the malicious mammoth laughs from the shadows! How can Sonic overcome all the odds? Find out inside! SONIC SAGA VOL. 6 collects selected stories from Sonic the Hedgehog#185-189.
Script: Ian Flynn
Art: Tracy Yardley!, Matt Herms, Jim Amash, John Workman, Josh Ray
Cover: Tracy Yardley!, Jim Amash and Jason Jensen
978-1-936975-99-0
$11.99/$13.99 CAN
112 pp
Direct Market On-sale: 10/22
PREVIW
SUBSCRIBE
DIGITAL