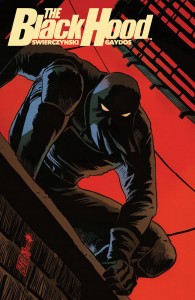 NEW SERIES FROM DARK CIRCLE! “The Bullet’s Kiss, Part 2” The acclaimed crime series continues with another dose of deadly noir by two masters of the genre. When you steal from the underworld, the underworld will come looking for you—even if you’re a cop. Greg Hettinger has unwittingly crossed the city’s most fearsome drug lord—a man only known as “The Connection,” who sends two of his most fearsome lieutenants after Greg. It’s one thing to have trouble come knocking on your front door. But it’s another when it’s already inside your house… 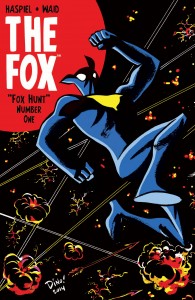 NEW ONGOING SERIES FROM DARK CIRCLE! THE FOX is BACK! Emmy Award winning writer/artist Dean Haspiel (Billy Dogma, HBO’s Bored to Death) is once again united with Eisner award-winning writer Mark Waid (Daredevil, Thrillbent) for FOX HUNT: Part One “The Situation”: When a billionaire philanthropist prepares Paul Patton Jr’s home town for demolition, our hero is sent on assignment to photograph the event. But what strange force lurks in the shadows, and why will it take Paul’s alter-ego, THE FOX, to stop it? The answer is the beginning of a deadly FOX HUNT and you won’t believe what happens next! Don’t miss the debut issue from the critically-acclaimed team that brought you THE FOX: FREAK MAGNET, featuring FOUR all-new variant covers! With art from Dean Haspiel, David Mack, Thomas Pitilli, Ulises Farinas and Chris Samnee! 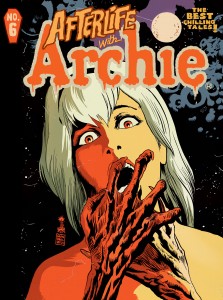 “The Nether-Realm”: The unthinkable has happened: Riverdale has become ground-zero for the zombie apocalypse, and the surviving members of our gang have been forced to flee their beloved home. However terrible things have been for Archie and friends, they’ve been MUCH worse for Sabrina the Teenage Witch. Banished to witches’ purgatory after using the dreaded Necronomicon, she’s now fighting for her immortal soul! The award winning team of writer Roberto Aguirre-Sacasa and artist Francesco Francavilla continue their celebrated run on the critically acclaimed series. This magazine-sized version provides a perfect entry-point for new readers of the smash horror TEEN+ hit! Definitely NOT for all ages! 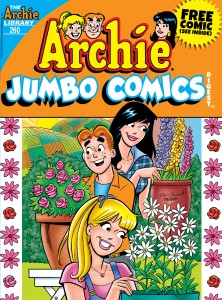 Spring has arrived, the sun is shining, the weather’s getting warmer and Riverdale Lake is open for spring activities! And for Archie “spring activities” mean one thing: dating! Archie and Betty make a date to ride paddle boats at the lake—but Veronica wants in on the spring fling, too! When Archie actually *gasps* rejects Veronica in favor of Betty, could it be that our lovable player is changing—or will his day in the sun have him up a creek? Find out in “Unlucky Lake Date,” the fun lead story to this JUMBO Comics Digest! 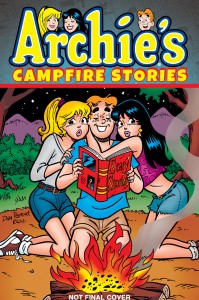 Pack a bag, grab some friends and don’t forget the s’mores—it’s time to head into the wide-open wilderness! Join your favorite Riverdale residents for some good ol’ fashioned open-air adventures in this collection of favorite stories featuring Archie, Betty, Veronica and friends camping in the great outdoors! ARCHIE’S CAMPFIRE STORIES features tons of fun for one great low price! 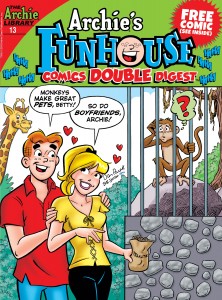 Archie and Veronica can’t seem to go a day without getting into some silly argument, so Archie comes up with a foolproof plan to prevent that from happening—he takes a vow of silence! If he can remain quiet for a whole 24 hours, there’s no possible way he could get into any squabbles with anyone… right? Is Archie’s plan infallible, or will he find himself wordlessly wandering into a war? Throw Reggie into the mix and anything’s possible! Find out Archie’s fate in “He’s Quiet a Guy!” the new lead story to this fun comics digest! 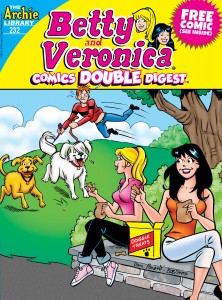 Betty & Veronica are both determined to show off their moves and become contestants on the hot new dancing TV series “SoDance Mania”! They’re ready to flaunt their dancing talents off to the world—and to out dance-number each other, too! The girls do whatever it takes to make sure their skills are top notch—but will they go too far? And will all of their hard work pay off? Find out in “Dippy Dancings,” the entertaining new lead story to this amusing comics digest! 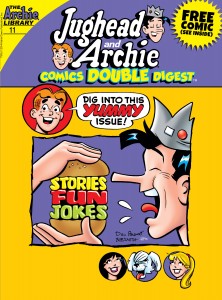 When Archie starts starting to get worried about his gluttonous pal Jughead’s unhealthy eating habits, he tries to get him into exercising. It’s to no avail, however, since Jughead insists that any kind of strenuous activity gives him a rash. Archie thinks it’s all in Jughead’s jug-head, but how can he explain those bumps on Jughead’s skin after every sport? Find out if Jughead’s truly allergic to exercise in “Don’t Be So Rash,” the funny lead story to this comics digest! 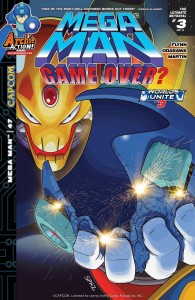 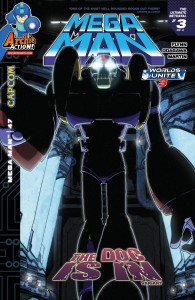 MEGA MAN #47
The penultimate chapter to the ultimate Mega Man epic is here! “The Ultimate Betrayal” Part Three: Mega Man must brave the many difficult challenges of Dr. Wily’s newest castle!  Awaiting Mega Man in the trapped-filled halls of the ferocious fortress is the vicious and super-powerful Doc Robot!  After seeing the pure destruction from this ferocious machine at Light Labs, does our hero even stand a chance? Or is the dreaded Doc Robot truly unstoppable?! The answers to these questions and more, plus cover art from the legendary Patrick “SPAZ” Spaziante and a special new variant cover from fan-fav T.REX, all in this latest MEGA-issue! 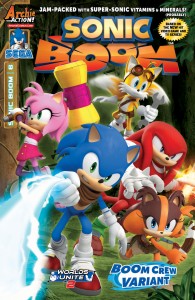 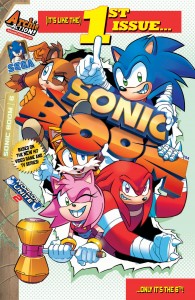 SONIC BOOM #6
What…What is that sound? No, really—what on earth is that noise? Waitaminute… is that the sound of go-karts??? IT… IT—IS! LET THE RACE BEGIN IN “EVERYBODY’S SUPER SONIC RACING” PART ONE! (IS THE CAPS LOCK STILL ON, OH WAITAMINUTE, there we go. Much better.)  When Dr. Eggman sponsors a go-kart race around Sonic’s Island home, you know that dude is up to no good. The rules are as follows: no special powers, no weapons, and everyone has to drive a kart to keep things fair.  Since when does Eggy care about “fair”? What will happen to throw this race into a SPIN? How many rhetorical questions can we ask in one paragraph of solicit text?? Find out in this hyperbole-packed issue! Featuring cover art from Sonic comic extraordinaire Tracy Yardley, plus a new BOOM-Crew Sega art variant! 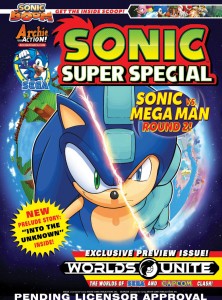 SONIC SUPER SPECIAL MAGAZINE #14
As Archie Action Comics races toward the WORLDS UNITE crossover event, prepare yourself with an all-new prequel tale: THE GENESIS PORTAL! When a strange energy signature appears on Sonic’s shattered world, what could it mean for our heroes and their fight to save the planet? And what ominous implications will this have for the WORLDS UNITE event? Featuring new story and art from the superstar Archie Sonic team! The SONIC SUPER SPECIAL MAGAZINE gives you the world of Sonic the Hedgehog comics as you’ve never seen it before, with tons of comic stories, special features and exclusive articles on the latest and greatest in the world of everyone’s favorite blue hedgehog-hero! This issue also features a special encore selection from the history-making “WORLDS COLLIDE” storyline, and much, much more! All this plus the extra features you love, an interview with Sonic newcomer Diana Skelly AND a super special shiny foil-enhanced cover featuring art by Sonic comic superstar Ben Bates! 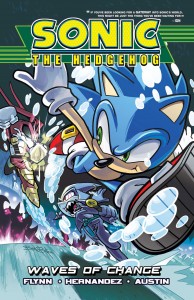 SONIC THE HEDGEHOG 3: WAVES OF CHANGE (TR)
The new Sonic comic universe is here! Moving at the speed of sound, keeping the world free from robotic tyranny—it’s SONIC THE HEDGEHOG! One of the oldest, most beloved video game icons speeds into brand new comic book stories with new friends, new foes and new adventures! In this volume of this new graphic novel series, Sonic is on the hunt for the seven Gaia Temples. Only their mysterious power can restore his world to normal! His quest takes him to places he’s never been before—such as the bottom of the ocean! Join Sonic, Amy and Rotor as they encounter a whole new undersea world full of new friends, foes and monsters from the deep! SONIC THE HEDGEHOG 3: WAVES OF CHANGE collects SONIC THE HEDGEHOG #260-263. 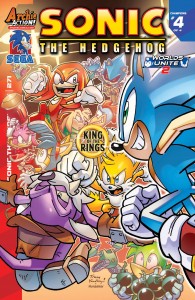 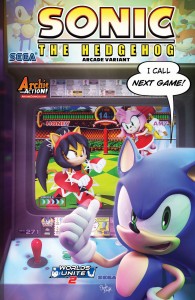 SONIC THE HEDGEHOG #271
Grab a front row seat for the finale to the brawl-iest, punch-iest, contest-iest Sonic comic saga yet! “Champions” Part Four: It’s the battle you’ve all been waiting for (again!): Sonic versus Knuckles—for the title and the Chaos Emerald!  The old rivalry blazes to life as the True Blue and Rad Red throw down for glory—and for the fate of the entire world!  But with the vengeful Hooligans waiting in the shadows, and Metal Sonic en route, will they even get to finish their fight, or will their foes beat them to the punch? Featuring new cover art from Sonic art legend Tracy Yardley and a super-special new ARCADE VARIANT by the latest Sonic art superstar RAFA KNIGHT! 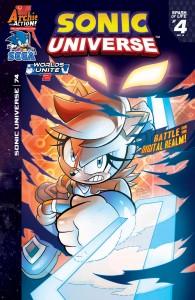 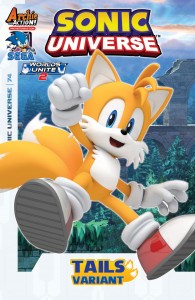 SONIC UNIVERSE #74
The final showdown for the fate of the digital realm is HERE! “Spark of Life” Part Four: It’s pandemonium aplenty in this conclusion to the stunning “Spark of Life” story arc!  Who, or what, is Phage?  Introductions aren’t necessary—she’s creating havoc for our heroes anyway!  Tails and Big—menaced by badniks and Dark Gaia Monsters alike!  A Chaos Emerald—about to fall into enemy hands!  Nicole—on the brink of deletion!  Will Sally sacrifice it all to save her friends and the world? Only the dramatic conclusion to SPARK OF LIFE can tell! Featuring cover art from Sonic comic artist extraordinaire Tracy Yardley, and a special SEGA-art TAILS variant cover! 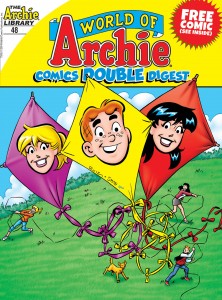 Archie keeps getting a special surprise gift every day: a “snackbox” filled with delicious treats and yummy goodies! The only problem is: he doesn’t know who is sending them, and they won’t stop coming! Will Archie find out the mystery snack supplier before he’s too full to move? Find out in “Snack Attack,” the hilarious lead story to this fun comics digest!