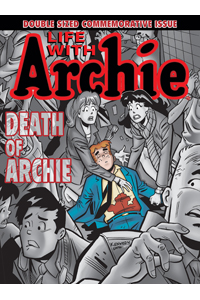 Comic Book Resources Executive Editor Jonah Weiland interviewed Archie Comics Publisher/Co-CEO Jon Goldwater on the debut episode of his new pop culture talk show on top LA radio station KFI AM640. The two had a wide-ranging discussion that covered many topics, including the modernization of classic Riverdale characters, the seminal “Death of Archie” storyline, and the smash-hit horror title AFTERLIFE WITH ARCHIE and its upcoming sister series, SABRINA.

On the creation of Kevin Keller: “When I first came into Archie I gathered all our artists and writers around the room and I said, “Look. We need to change things up here because if we don’t, we’re soon going to be bordering on irrelevancy.” And I was worried that Archie was going to be viewed as a character that was stuck in some time warp in an unrealistic world. And I was afraid for the future of the company if we continued down that road,” Goldwater said.

“We needed to do something to make it a lot more interesting than we were making it.”

Goldwater talked about how the LIFE WITH ARCHIE storyline made headlines around the world following the death of Archie Andrews, the future of Archie Comics as a company, and more.

For full audio of the interview, follow this link to the KFI AM640 website. The interview starts at (16:00)