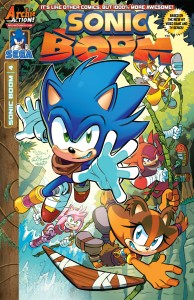 The NEW ONGOING SONIC COMIC BOOK SERIES from Archie Comics keeps on BOOMIN’ with Sonic Boom #4: Sticks and Stones! Dr. Eggman’s Big Boy mech has been refined into its final, deadly form. Sonic and his friends are on the ropes—but have no fear! Sticks has brought her secret weapon! It’s a… wait, seriously? This thinks THAT’s going to help?! Find out what her secret weapon is in the weird and wacky conclusion to the first story arc of the brand-new series SONIC BOOM! Featuring cover art from Sonic art guru Tracy Yardley and an all-new “Sticks-with-stones-being-chased-by-bones” variant cover from rising Sonic star Diana Skelly! 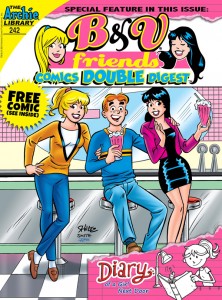 A new craze has hit Riverdale… and it’s a sweet one! When Betty and Veronica get hooked on the new mobile game Candy Craze, they start a new fad at Riverdale High—and even get some unexpected people hooked on the game. Find out who will have the top score in “Candy Craze,” the sugary-sweet new lead story to this fun-filled comics digest! 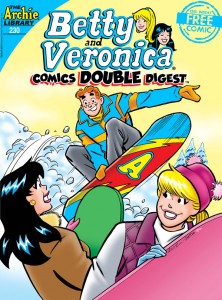 Veronica—dethroned from the position as reigning fashion queen at Riverdale High? Say it ain’t so! When Sheila Wu’s fashions are the hottest topic in the school newspaper, Veronica sets out to maintain her spot as the top fashionista of Riverdale High—starting with an attempt at being the most stylish girl at the upcoming 2 Chic Divas concert. Will Veronica pick out the most top of the line outfit? Find out in “Designing Divas,” the chic lead story to this fun comics digest! 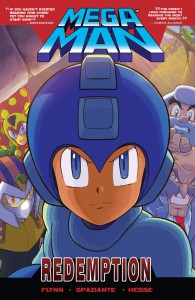 The FUTURE IS NOW in the next chapter in the Mega Man graphic novel saga! Mega Man took up his Mega Buster to stop the evil ambitions of Dr. Wily. That means Dr. Wily is his greatest enemy–-right? Not according to the Doctor! He says he was being used by the terrifying Ra Moon, and to prove it, he saves Mega Man’s life! What is the truth behind Dr. Wily? Is he plotting something sinister yet again, or has he really been the victim all along? Mega Man embarks on a mission that will test his courage as much as his skill to find out the truth! Featuring the first-ever look at the world of MEGA MAN X in comic book form, as drawn by Sonic legend PATRICK “SPAZ” SPAZIANTE! 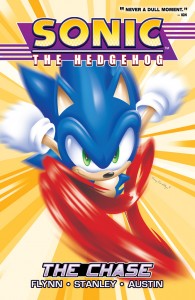 The hottest new Sonic graphic novel series continues! Moving at the speed of sound, keeping the world free from robotic tyranny—it’s SONIC THE HEDGEHOG! One of the oldest, most beloved video game icons speeds into brand new comic book stories with new friends, new foes and new adventures! Sonic’s world has been shattered into pieces—literally! It’s up to Sonic and his heroic friends, the Freedom Fighters, to do damage control and find a way to fix the world! But they aren’t alone in their search. Dr. Eggman wants to fix the planet too—so he can conquer it! 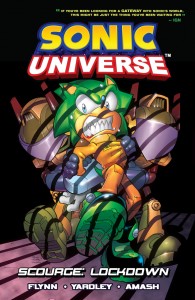 SONIC UNIVERSE is the hit spin-off series to Archie Comic’s wildly successful SONIC THE HEDGEHOG comic book series! Explore the characters, worlds and dimensions of Sonic’s universe! Everybody knows Sonic the Hedgehog—the cool, blue hero of his world! But on the dark mirror world of Moebius, the mean, green Scourge menaces everyone! He did until he was finally brought to justice, that is. But Scourge’s old flame, Fiona Fox, brings her gang of the Destructix to bust him out. Can Scourge get the gang to follow his lead? Can any of them break out of the maximum-security prison? It’s “Sonic” at his most villainous in Scourge’s breakout story!