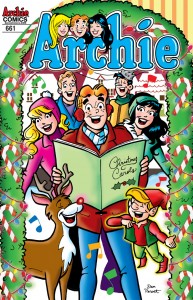 He knows if you are sleeping, he knows when you’re awake. He knows if you’ve been bad or good… but he doesn’t know what it’s like to be a teen, for goodness sake! When the jolly fat man in red starts feeling like he has lost touch with the modern teenager, he’s not sure what he should do! Enter: everyone’s favorite holiday pest, Jingles! The tiny elf with the big attitude suggests that Santa spend a week with the hippest teen of them all: Archie Andrews. But with St. Nick living with him and his family, how can a klutz like Archie keep the presence of both Santa AND Rudolph a secret? And will he manage to stay off the naughty list? 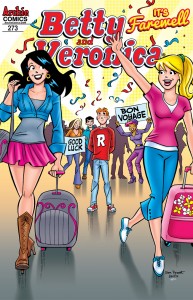 Get ready for the adventure of Betty and Veronica’s lives in FAREWELL BETTY & VERONICA PART 2! Betty and Veronica are getting tired of their lives in Riverdale! Day in, day out, it seems that nothing ever changes! But there is a light at the end of the tunnel: an escape, an adventure! The Riverdale School Board has approved the chance to send a student overseas in a rotating student exchange program for one school year. The catch is that only ONE student can go! Betty and Veronica are in for the fight of their lives, as they campaign against each other for the one chance get into the exchange program. 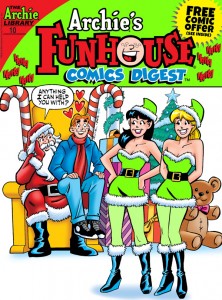 ‘Tis the season to be jolly—and Reggie intends to be just that! He’s plotting to date five of the new female students at Riverdale High, and he’s even found a cheap, but expensive looking, gift he can use to impress them all. …Or at least he thinks it’s cheap! See the merry mix-up unfold in “It’s the Thought That Counts!” a brand new lead story to this fun-filled comics digest! 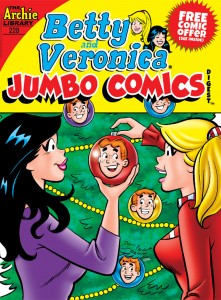 The holiday season is upon us, and that means it’s time to shop! Of course for shopaholic Veronica, that’s not a problem! When Mr. Lodge gets fed up with Veronica’s out of control spending habits, he demands that she get a job at the local mall. Of course, not one to do menial work, Veronica immediately takes over management of the mall. Will she transform the shopping center into a Winter Wonderland, or is she in over her head? Find out “Are You Being Served?” Then, in “It’s in the Cards,” Veronica’s got quite a collection of cards—no, not Christmas cards, credit cards! But who knew they could provide more than just a form of payment? Find out the other use of credit in this fun story! It’s two brand new stories in this jolly JUMBO comics digest!