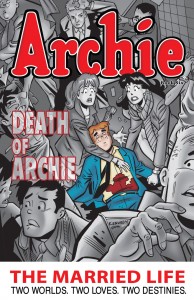 It’s the comic book event of the century—the death of Archie Andrews! Read the story the entire world is discussing in this heart-wrenching finale to the MARRIED LIFE graphic novel series, as Archie Andrews–-America’s most beloved character-–sacrifices his life heroically while saving the life of a close friend. Bringing to a close the acclaimed storyline that revealed the future of Archie and his friends, THE MARRIED LIFE BOOK 6 is an essential addition to the library of any graphic novel fan, and features what is sure to be one of the most-discussed finales in the history of comics and entertainment. 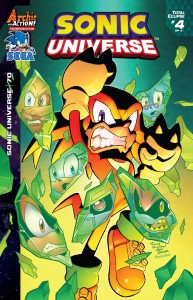 The FIRST EVER SONIC UNIVERSE TRILOGY reaches its stunning conclusion in “Total Eclipse” Part Four!
Knuckles and Shadow must end their duel—because Eclipse has escaped with the Master Emerald! Can the two chaos-fueled warriors stand up to the power of the Dark Arms? Knuckles may be forced into the one choice he doesn’t want to make! Don’t miss the sense-shattering finale that will change the shattered world crisis and the Sonic comic landscape as we know it!
Featuring stunning new cover art from Yardley, Amash and Hunzeker, plus an awesome SEGA art variant featuring two of the biggest “Total Eclipse” stars: Knuckles and Rouge!
Script: Ian Flynn
Art: Tracy Yardley, Jim Amash, Jack Morelli and Matt Herms
Cover: Tracy Yardley, Jim Amash and Ben Hunzeker
Variant Cover art provided by SEGA
32-page, full color comic
$3.99 U.S. 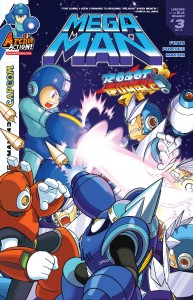 The battle ain’t over yet, and the legend has only just begun! Based on the renowned game Mega Man 3 comes “Legends of the Blue Bomber” Part Three: We’ve seen Mega Man battle Robot Masters many times before, but now witness the automaton insanity unfold from the perspectives of their creators! Magnet Man wonders if he’s led his brothers astray as he prepares to stop Mega Man. Needle Man won’t go quietly, instead choosing a battle on his own terms! Meanwhile, Auto makes a shocking discovery about Dr. Wily—but will he survive to report it?! Featuring all-new cover art from the legendary Patrick “SPAZ” Spaziante and classic Capcom variant cover to complete your Mega-collection! 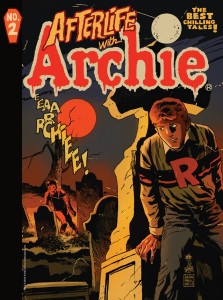 The end of the world is here… The horror continues as a zombified Jughead goes on a relentless hunt for brains in this shocking series by Harvey Award-winning comic/screenwriter Roberto Aguirre-Sacasa (Stephen King’s Carrie, ARCHIE MEETS GLEE) and Eisner-winning artist Francesco Francavilla (Batman, Black Beetle).

When he performs a despicable and frightening act in front of everyone at the Halloween dance, tensions start to rise and fears begin to mount—who will be next to join Jughead in the Afterlife? And what about those who are already infected? Be warned, kiddies, this one’s not for the faint of heart! This magazine-size edition of the award-winning AFTERLIFE WITH ARCHIE features sorcery stories from the vaults and all-new extra features. 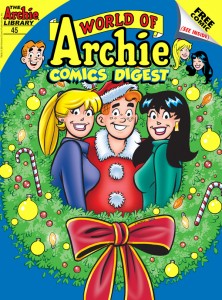 Dilton invents a handy Christmas app that’s supposed to help Archie pick out the perfect gift for Veronica—but even modern technology can’t help find something for the girl who has everything! Archie and Jughead decide the only way they can find something for her that she doesn’t own is by shopping somewhere completely different—and so they recruit their pals to find her the perfect gift. But has the answer been at the tip of their fingers all along? Find out in “The Christmas App,” the festively fun lead story to this comics digest!

Find a comic shop near you: Visit the Comic Shop Locator website or dial 1-888-COMIC-BOOK