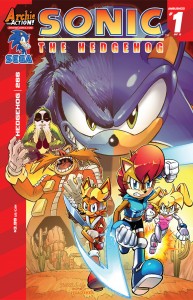 Brand new STORY ARC! “Ambushed!”
Part One: Sonic’s in need of some inner-peace…but it’s going to take more than yoga and meditation! He seeks the guidance of Mighty the Armadillo’s mentor, Moss the Sloth. Can the sage help Sonic tame the savage Werehog within? Meanwhile, Sally leads the Freedom Fighters in recovering a Chaos Emerald—but could she be leading them right into a trap? Featuring all-new cover art from Lamar Wells, Terry Austin and Ben Hunzeker, and part 3 of a 3-part connecting “SUPER SMASH” collector cover set! Collect all 3 covers with Mega Man #42 and Sonic Universe #69! 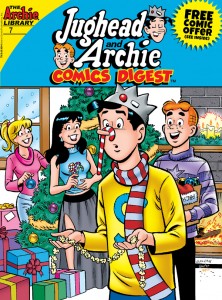 The gang gifts Jughead with a very special holiday treat—a brand new hat! He doesn’t have much in terms of money to gift his friends with in return, so he makes a list of the ultimate presents he wants to create for each of his friends. See what he wishes to buy his closest pals in “Fantasy Time,” a fun new story kicking off this comics digest!