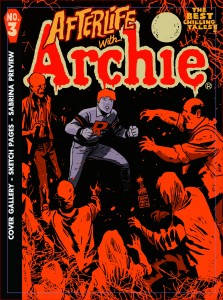 AFTERLIFE WITH ARCHIE MAGAZINE #3
“Escape from Riverdale” Part 3: The zombie apocalypse is in full swing and the surviving members of the gang have taken refuge in the Lodge Mansion—believing themselves safe from the infected roaming the streets of Riverdale! But there’s no stopping Archie from sneaking out, risking life and limb to find his missing parents—leaving those sequestered behind vulnerable to an enemy within! The zombie mayhem (and body-count) continues to rise PLUS sorcery stories from the vault and all new special features in this magazine-size version of the award-winning series. For TEEN+ readers!
Script: Roberto Aguirre-Sacasa
Art: Francesco Francavilla
Cover: Francesco Francavilla
On Sale at Comic Specialty Shops: 12/17
48-page, full color comic
$4.99 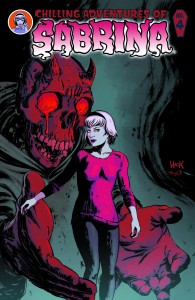 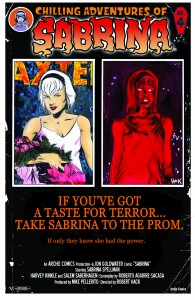 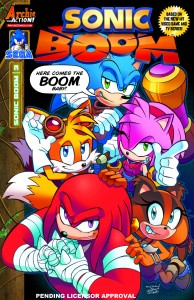 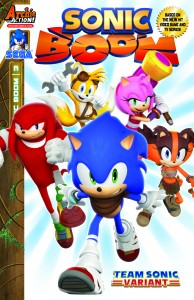 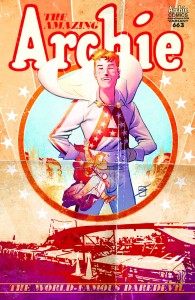 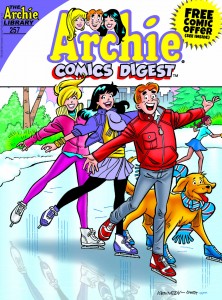 ARCHIE #663
Archie’s car is trusty—you can always count on it to break down! Jughead suggests that Arch trade in his dead beater at the local used car lot, but the best the dealer can offer him is a battered old scooter! It’s walk or ride so Archie has no choice but to take the deal, though he’s not so sure about the “coolness” factor of his underpowered two-wheeler. He’s not looking forward to his new ride being mocked at school—and he’s definitely not looking forward to facing Veronica with his new wheels. Little does he know, Veronica’s having some car trouble of her own. Will Archie’s scooter prove to be cooler than he anticipated? And whose got the crazier ride—Archie or Veronica? The answers await you in this fun new issue of Archie!
Script: Chuck Dixon
Art: Pat and Tim Kennedy
Cover: Dan Parent
Evel Knievel Poster Variant Cover: Ron Salas
On Sale Date: 1/7
32-page, full color comic
$3.99 U.S.

ARCHIE’S COMICS DIGEST #257
Little Archie is eager to help Betty and Veronica build the best snowman in Riverdale, but his track record of being a klutz makes them reluctant to let him join in on the frosty fun! The gals eventually decide to let him help them out on one condition: he stays far away from the snowman! Can Archie help out without making a mess? Find out in “Snow Problem!” the fun new lead story to this comics digest!
Script: J. Torres
Art: Bob Bolling
Cover: Pat and Tim Kennedy, Bob Smith, Rosario “Tito” Peña
On Sale Date: 1/7
160-page, full color comic
$4.99 U.S. 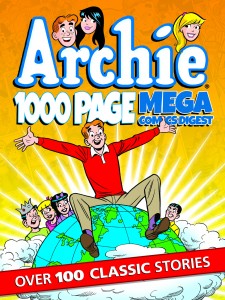 ARCHIE COMICS 1000 PAGE COMICS MEGA-DIGEST (TR)
There’s always room for more merriment from Archie and his pals ‘n’ gals! Get ready for 1000 more mega-pages of hijinx and hilarity! For over seven decades, Archie and his friends have been making everyone laugh, with their dating hijinx and misadventures at Riverdale High School! Everything’s Archie in the largest Archie collection series EVER—offered at an incredible value price!
Script: Various
Art: Various
978-1-61988-968-2
$14.99/$15.99CAN
4 7/8 x 6 9/16”
1000 pp, Full Color
Direct Market On-Sale Date: 1/7 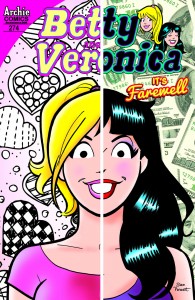 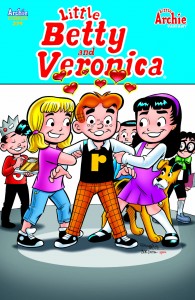 BETTY & VERONICA #274
Betty and Veronica are both set to start off on a whirlwind adventure that will take them abroad for a whole semester—and the first leg of their journey is London! Get ready to meet the new families Betty and Veronica will be living with during their stay. How will they manage in this unfamiliar territory? Will they get the excitement they’re looking for? Can they handle both study and play in Europe? When they find themselves falling into the same traps and routines they encountered back in Riverdale, they realize what really needs to change is themselves. See how they make this change PLUS meet the two exchange students taking Betty and Veronica’s place in Riverdale while they’re away!
Script: Michael Uslan
Art: Dan Parent, Bob Smith, Jack Morelli, Glenn Whitmore
Cover: Dan Parent
Little Betty & Veronica Variant Cover: Fernando Ruiz, Bob Smith, Rosario “Tito” Peña
On Sale Date: 12/17
32-page, full color comic
$3.99 U.S. 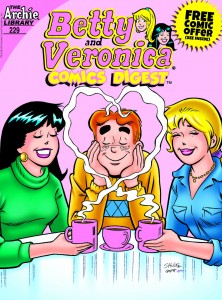 BETTY & VERONICA COMICS DIGEST #229
The Lodge Mansion becomes the meeting spot for all of the clubs in Riverdale High while the school is being cleaned, thanks to a “bright” idea from Archie. It turns out that there are a lot more afterschool activities that go on at Riverdale High than everyone imagined—will there be enough space to house all of them? And how will Mr. Lodge react to this afterschool invasion? Find out in “The Club House!” the new, zany lead story to this comics digest.
Script: Fernando Ruiz
Art: Fernando Ruiz
Cover: Jeff Shultz, Bob Smith, Rosario “Tito” Peña
On Sale Date: 12/24
160-page, full color comic
$4.99 U.S. 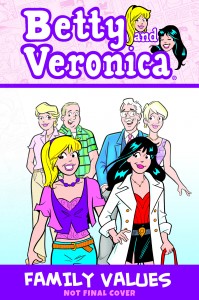 BETTY & VERONICA: FAMILY VALUES (TR)
Spend some quality time with your favorite Riverdale families in this collection of the best stories featuring the parents and siblings of Betty, Veronica and friends! We all know Mr. and Mrs. Lodge and Mr. and Mrs. Cooper—but what about Betty’s news reporter sister Polly and her mysterious brother Chic? Get acquainted with Veronica’s nerdy cousin Marcy, her troublemaker cousin Leroy and her quirky, truck driving aunt Zoey! It’s the most fun family reunion you’ll ever see in Betty & Veronica: Family Values!
NOT FINAL COVER
Script: Various
Art: Various
978-1-61988-966-8
$9.99/$10.99CAN
6 x 9”
128 pp, Full Color
Direct Market On-Sale Date: 12/24 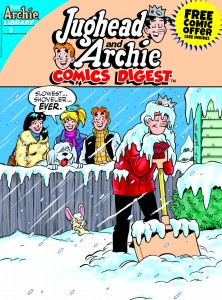 JUGHEAD AND ARCHIE COMICS DIGEST #9
Cupid headquarters have just received a message that a girl in Riverdale wishes to be kissed. The girl: Ethel. The hopeful kisser: Jughead. The cupids know better than to try and strike the female-hater himself, but a wish is still a wish. This looks like a job for a woman! Can “Queenie,” the new female cupid successfully grant Ethel’s wish? Or will Jughead resist the feminine wiles once more? Find out in “Mission Most Improbable,” this fun, new lead story!
Script: George Gladir
Art: Various
Cover: Fernando Ruiz, Bob Smith, Rosario “Tito” Peña
On Sale Date: 1/14
160-page, full color comic
$4.99 U.S. 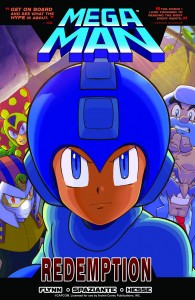 MEGA MAN 8: REDEMPTION (TR)
The FUTURE IS NOW in the next chapter in the Mega Man graphic novel saga! Mega Man took up his Mega Buster to stop the evil ambitions of Dr. Wily. That means Dr. Wily is his greatest enemy–-right? Not according to the Doctor! He says he was being used by the terrifying Ra Moon, and to prove it, he saves Mega Man’s life! What is the truth behind Dr. Wily? Is he plotting something sinister yet again, or has he really been the victim all along? Mega Man embarks on a mission that will test his courage as much as his skill to find out the truth!
Featuring the first-ever look at the world of MEGA MAN X in comic book form, as drawn by Sonic legend PATRICK “SPAZ” SPAZIANTE!
Script: Ian Flynn
Art: Tyson Hesse, Patrick “Spaz” Spaziante, Powree, Gary Martin, Rick Bryant, John Workman, Matt Herms
Cover: Patrick “Spaz” Spaziante
978-1-61988-944-6
$11.99/$13.99CAN
Direct Market On-Sale Date: 12/24
6 5/8 x 10 3/16”
104 pp, Full Color 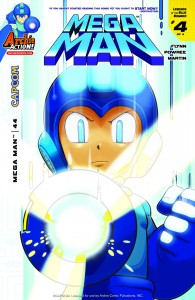 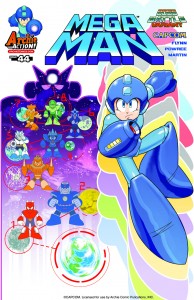 MEGA MAN #44
The blue-BOMBastic conclusion to LEGENDS OF THE BLUE BOMBER is here! The battle is about to reach its shocking conclusion—or will it? Based on the legendary game Mega Man 3 comes “Legends of the Blue Bomber” part 4! Hard Man is all set to destroy Mega Man—so why is he offering his enemy a free recharge? Spark Man won’t hold back as he sets out to avenge his fallen brothers! Meanwhile, Dr. Wily puts the finishing touches on his greatest creation to date, meaning this isn’t the end of Mega Man’s battles!
Featuring new cover art from Mega Man art legend Patrick “SPAZ” Spaziante and variant cover by Ben Bates!
SCRIPT: Ian Flynn
ART: POWREE, Gary Martin, John Workman and Matt Herms
Cover: Patrick “SPAZ” Spaziante
Box Art Variant Cover art provided by Capcom
On Sale Date: 12/17
32-page, full color comic
$3.99 U.S. 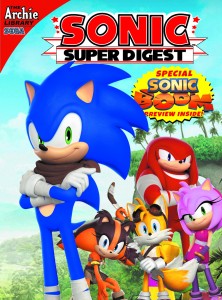 SONIC SUPER DIGEST #10
Get ready for fun & adventure—it’s Sonic Super Digest! Featuring classic stories from the comic’s 20+ year history! Join Sonic and his friends as they embark on daring adventures, face evil villains and save the day one chili dog at a time!
This month features a special spotlight on the newest Sonic comic series from Archie Action — Sonic Boom! Check out awesome BOOM cover art, features and a special preview of the anticipated new series! Plus stories featuring Shadow and Knuckles in the wake of the epic “DARK TRILOGY,” and everyone’s favorite FF leader Sally Acorn! Spin into the fun that only Archie Comics and Sonic Super Digest can bring! Featuring bonus content you can only find in this exclusive digest collection!
Script: Ian Flynn & Various
Art: Various
Cover: SEGAS
On Sale Date: 12/17
128-page, Full Color
$4.99 U.S. 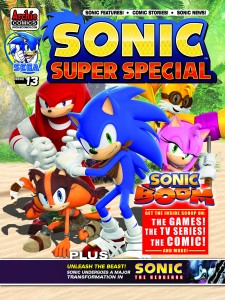 SONIC SUPER SPECIAL MAGAZINE #13
“Sonic Boom-tacular!”: The mega-magazine stuffed with Sonic goodness comes speeding at you with exclusive SONIC BOOM special features, awesome art from the comic series and the inside scoop on the biggest Sonic event in decades! SONIC BOOM is the newest Sonic sensation bringing brand new games, cartoons—and now—comics!
The SONIC SUPER SPECIAL MAGAZINE gives you the world of Sonic the Hedgehog comics as you’ve never seen it before, with tons of comic stories, special features and exclusive articles on the latest and greatest in the world of everyone’s favorite blue hedgehog-hero! Featuring an awesome special FOIL cover featuring the cast of Sonic BOOM!Script: Ian FlynnCover art provided by SEGA
Art: Various
On Sale Date: 12/17
128-page, full color comic
$9.99 U.S. 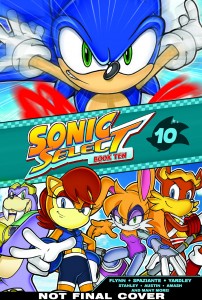 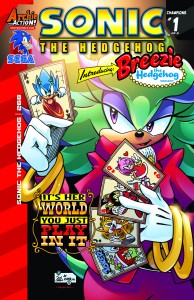 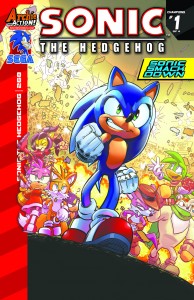 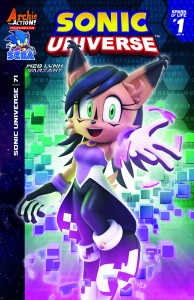 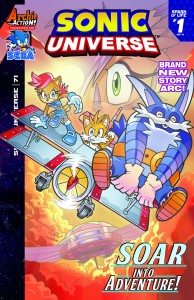 SONIC UNIVERSE #71
ALL-NEW STORY ARC! “Spark of Life” Part One: Nicole detects a distress signal from the Digital World—but how can that be if nobody is supposed to know about the Digital World?! Sally, Tails and Big must travel to Isolated Island to answer the call for help! Who is Dr. Ellidy? And in what way does he link the lives of Sally and Nicole? Featuring a stunning new cover by Tracy Yardley and “Web Lynx” Variant cover art by rising Sonic star Rafa Knight!
Script: Ian Flynn & Aleah BakerWeb Lynx Variant Cover: Rafa Knight
Art: Tracy Yardley, Jim Amash, Jack Morelli and Matt Herms
Cover: Tracy Yardley & Ben Hunzeker
On Sale Date: 12/24
32-page, full color comic
$3.99 U.S. 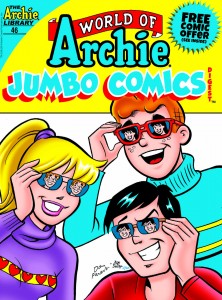 WORLD OF ARCHIE JUMBO COMICS DIGEST #46
Archie and Jughead are spending their weekend at—school?! No, it’s not some kind of massive detention torture, they’ve been hired to do some repairs and paint the walls of Riverdale High School. They’re ready to do a job well done, but each crack and tear reminds them of a special memory they associate with it. Will they be too distracted to get the job done? Find out in “Between the Cracks,” the hilarious new lead story to this JUMBO comics digest!
Script: Craig Boldman
Art: Fernando Ruiz
Cover: Dan Parent, Bob Smith, Rosario “Tito” Peña
On Sale Date: 12/17
288-page, Full color comic
$6.99 U.S.