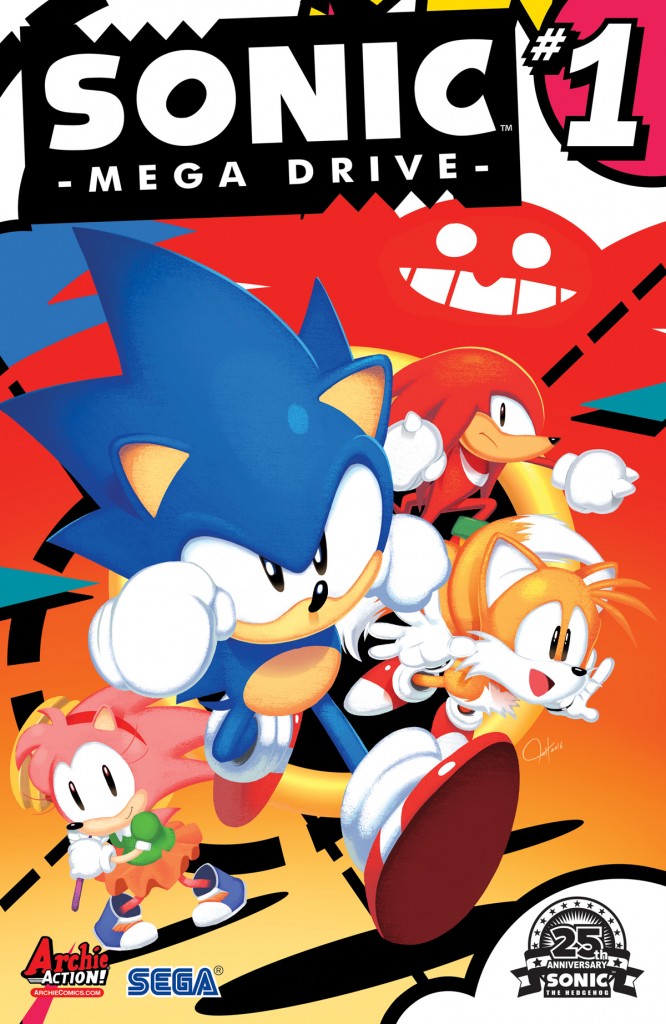 Archie Comics speeds back to the early days of Sonic the Hedgehog with this commemorative one-shot issue celebrating 25 year’s of SEGA’s blue blur! Follow Sonic, Tails, Knuckles, and Amy Rose on a brand new adventure taking on the villainous Dr. Eggman and his new nefarious tool of destruction — the MEGADRIVE.

“Not only is Archie Comics celebrating its 75th anniversary this year, the Sonic the Hedgehog franchise is also commemorating a milestone anniversary. With 25 years under the Blue Blur’s belt, we wanted to start the celebrations with something truly special,” said Editor Vincent Lovallo.

“The goal was to produce a story that hardcore fans would love, but also feel fresh and new for anyone looking to read a Sonic comic for the first time. The result is SONIC: MEGA DRIVE #1.”

“With more surprises on the way for Sonic’s 25th Anniversary, fans are not going to want to miss this epic “Classic Sonic” story.” teased Lovallo.

Sonic spins into a brand new, Classic-styled, SUPER SPECIAL one-shot “Mega Drive”! Join Sonic, Tails, Knuckles and Amy Rose on a brand new adventure—set after the fall of the Death Egg! The nefarious Dr. Eggman is trying to build a new engine of destruction: the MEGADRIVE, and it’s up to Sonic and his whole crew to stop the mad doctor and save the day! Join Sonic and his friends in this special commemorative issue celebrating the 25th Anniversary of the Blue Blur!